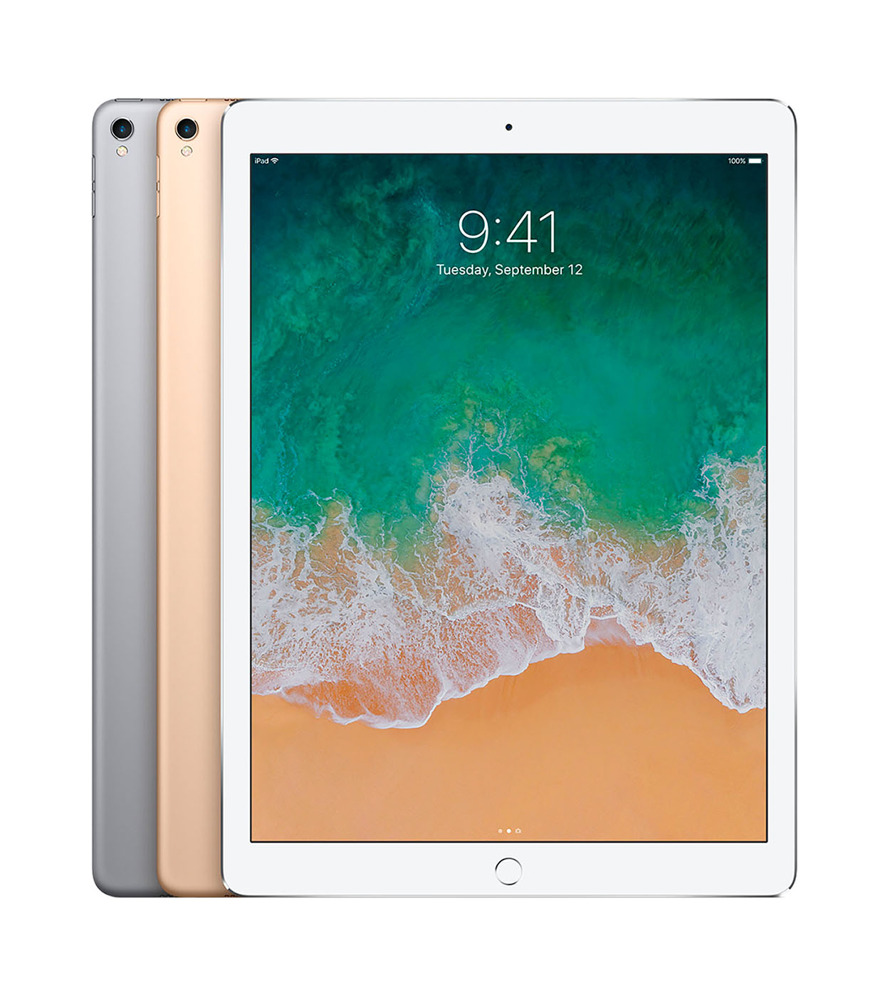 The 2017 refresh of the iPad Pro line sees Apple replacing the 9.7-inch model with a new 10.5-inch version, while retaining the 12.9-inch original. New wider color displays with variable refresh rates to help with Apple Pencil use are joined by other expected performance improvements. 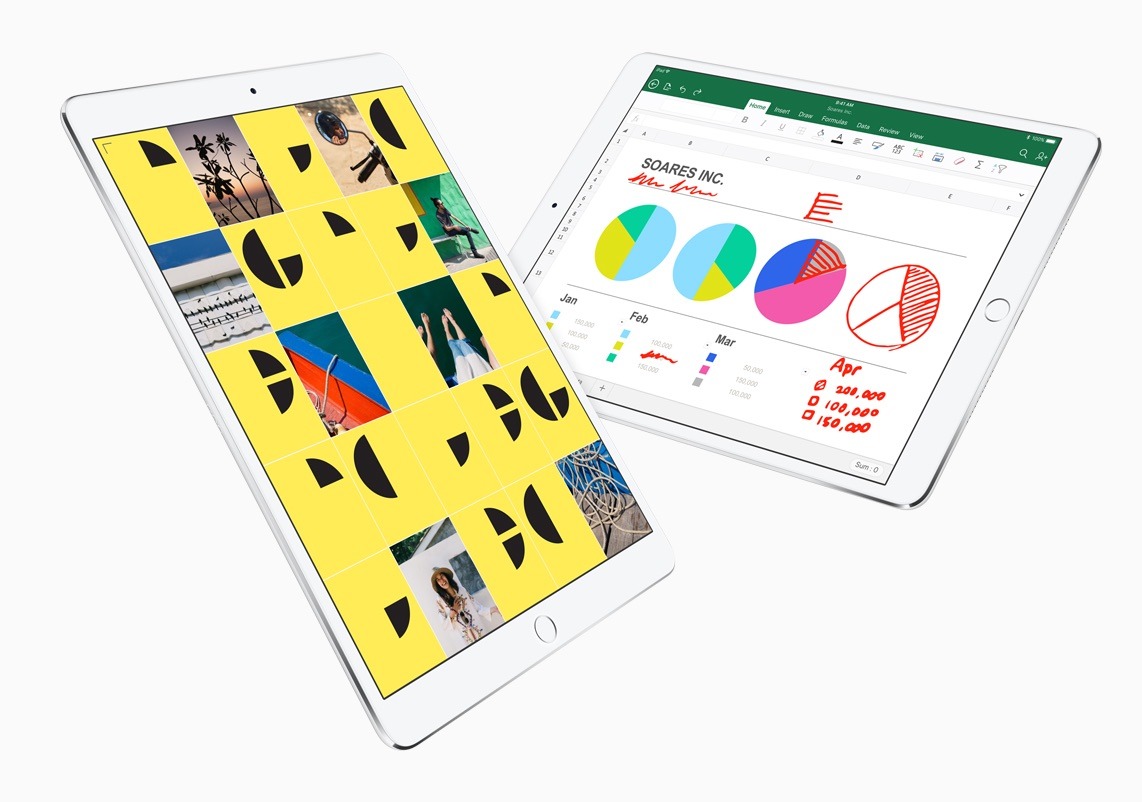 Unveiled during Apple's Worldwide Developer Conference 2017, the updated iPad Pro lineup consists of two tablets, with the 9.7-inch model replaced by a larger 10.5-inch version but still accompanied by the 12.9-inch variant, with both incorporating changes to the display, a new processor, new cameras, and other improvements.

Rather than updating the 9.7-inch model, Apple introduced a new slightly larger version of the tablet, intended to be the smaller of the two iPad Pro devices. The 10.5-inch version is approximately 20 percent larger than the 9.7-inch model, though with borders reduced by 40 percent, making the physical increase in size much smaller than it could be.

The extra screen space allows Apple to include a full-size onscreen keyboard, making it easier for users to type compared to its predecessor. The larger size also allows support for a full-size layout for the Smart Keyboard accessory, produced to match the device's physicality.

The 12.9-inch iPad Pro retains the same borders as the first generation. This model is 12 inches long, 8.68 inches wide, and 0.27 inches thick, with the Wi-FI and Cellular versions weighing in at 1.49 pounds and 1.53 pounds respectively. 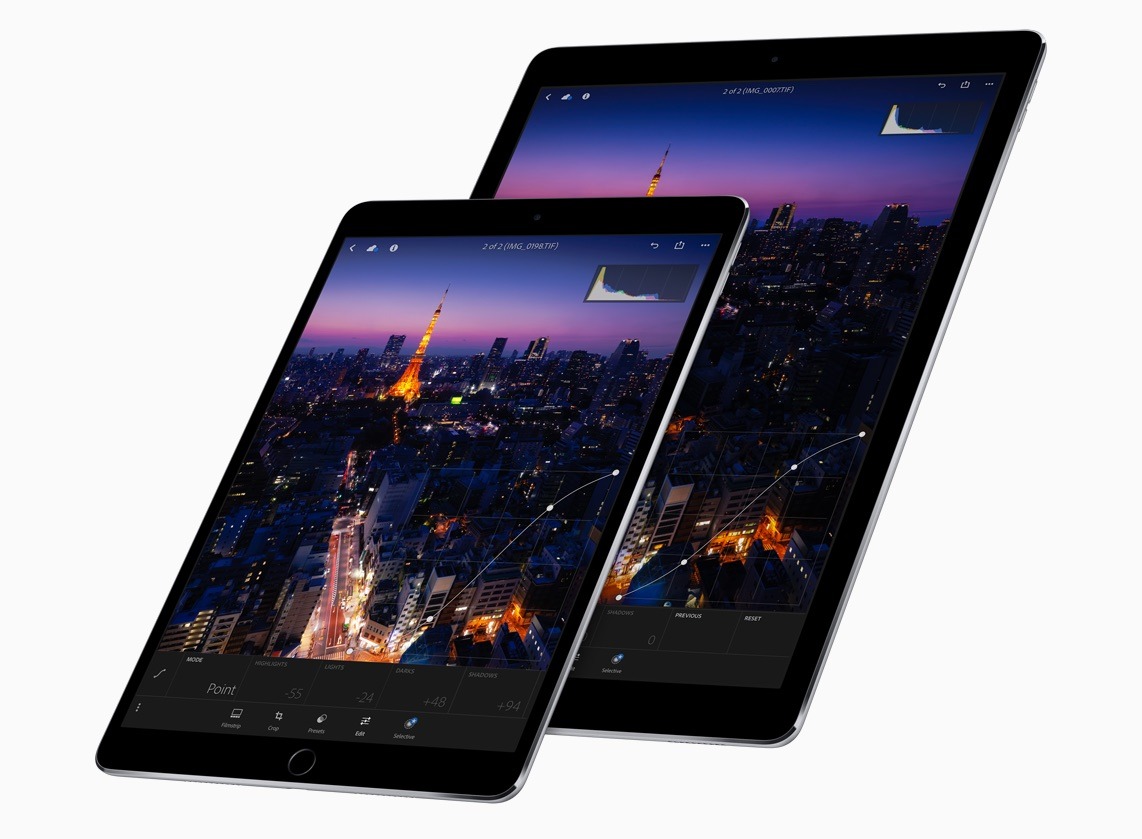 Both models incorporate a new wide color P3 display, giving it cinema-level color accuracy, with the screens offering up to 600 nits of brightness. The antireflective coating used, alongside a fingerprint-resistant oleophobic coating, is said to allow the new iPad Pro models to reflect as little as 1.8 percent of light, making it more usable in sunlight and bright locations.

A new addition is the introduction of ProMotion technology, which gives the iPad Pro a refresh rate of up to 120Hz, double the previous model. This allows for drawing with the Apple Pencil to be more fluid than before, cutting input latency down to 20 milliseconds, while the ability to vary the refresh rate to match the viewed content can help reduce power consumption.

This time, both of the iPads incorporate True Tone, a system introduced with the iPad Pro 9.7-inch that uses a collection of sensors to detect ambient light, allowing the iPad to alter the color of the display to better suit the area it is being used within. This slight change in brightness and color is thought to help prevent eyestrain and overexposure to blue-toned light, which is said to interrupt sleep patterns. 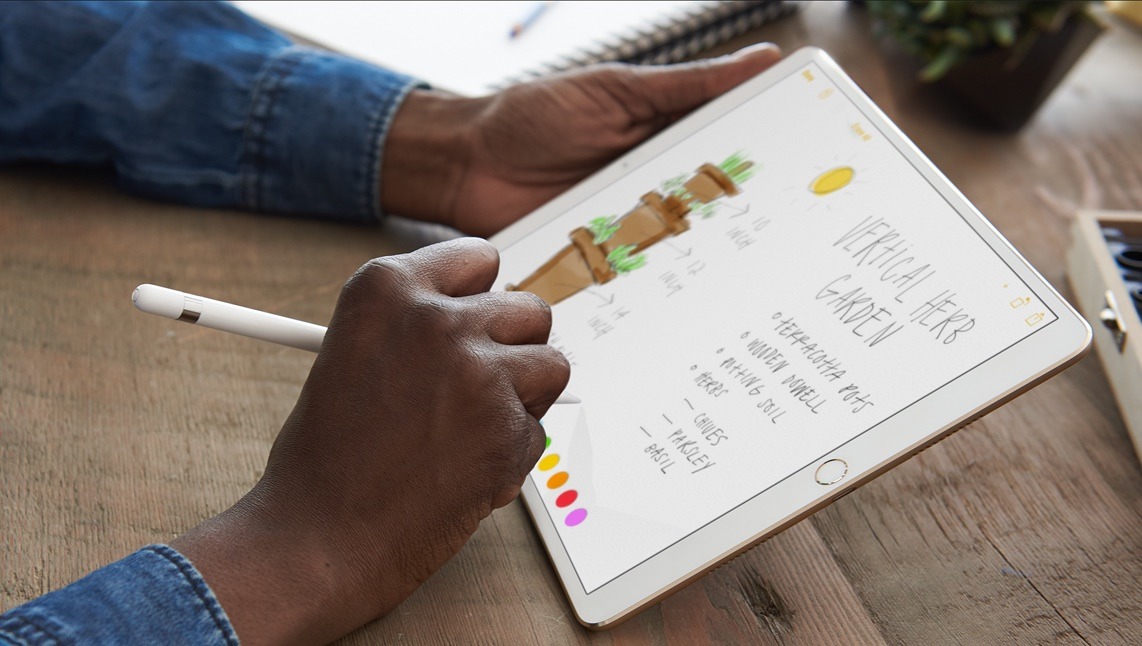 For the new iPad Pro generation, Apple is using the new A10X Fusion chip, consisting of a 64-bit six-core CPU and a 12-core GPU, with the M10 coprocessor also embedded in the package. . Apple claims the A10X delivers up to 30 percent faster CPU performance and 40 percent faster graphics than the A9X chip, which used four CPU cores and half the GPU cores.

Four speakers are used to deliver audio, as well as dual microphones for more efficient reception of the user's voice for calls and video conferencing. Mounted on the front is a second-generation Touch ID reader built into the Home button, which Apple claims is more responsive than in the original iPad Pro range.

All models have dual-band Wi-Fi with MIMO, capable of connecting to 2.4GHz and 5GHz-band networks with support for 802.11ac networks and earlier, giving it a maximum connection speed of up to 866Mbps over a local network. Bluetooth 4.2, a digital compass, three-axis gyro, accelerometer, barometer, and iBeacon microlocation are also included across the board.

The cellular models include an embedded Apple SIM for connection to a mobile network, with support for LTE-Advanced on 25 bands and a maximum speed over LTE of 450Mbps. There is also support for CDMA networks, Wi-Fi calling, and assisted GPS and GLONASS positioning.

The 10.5-inch iPad Pro boasts a 30.4WHr lithium-polymer battery, while the 12.9-inch model has a larger 41WHr version. According to Apple, all models can run for up to 10 hours of surfing over Wi-Fi, watching video, or listening to music, though the batteries in the cellular versions can power up to 9 hours of web surfing over a mobile network. 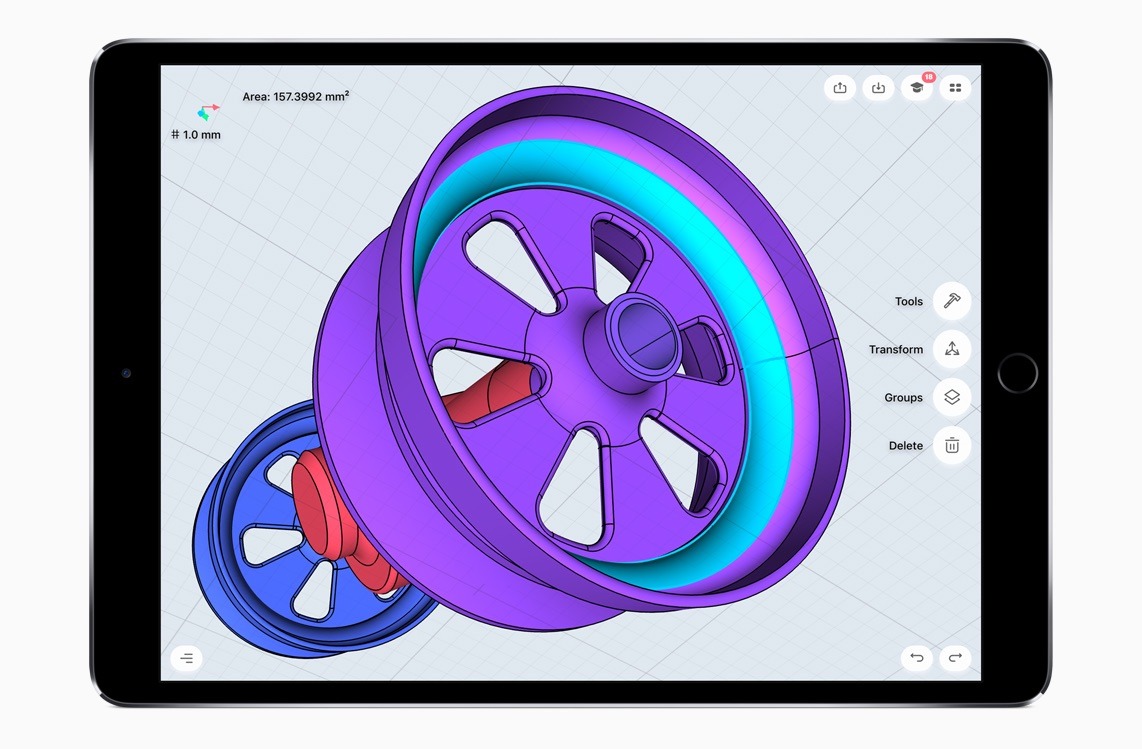 The rear camera for both iPad Pro models uses a 12-megapixel sensor with optical image stabilization, an f/1.8 aperture, a 5x digital zoom, quad-LED True Tone flash, and hybrid IR filter. Among the rear camera's features are 4K recording at 30fps, 1080p video at 60fps, slow-motion video at 1080p 120fps and 720p 240fps, and the ability to capture 8-megapixel still images while recording a 4K video. 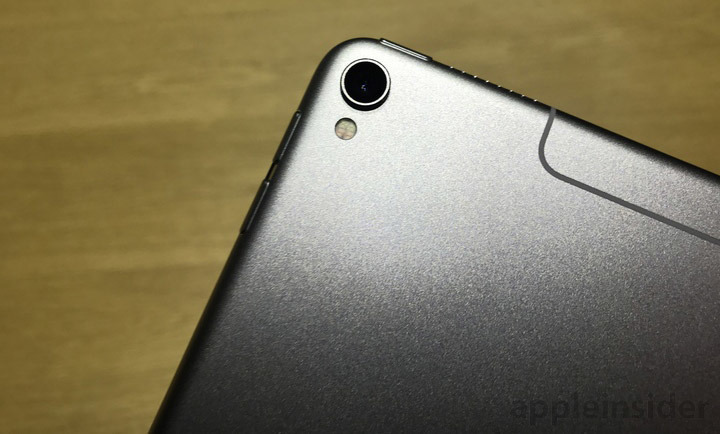 All iPad Pro models are available to purchase now. 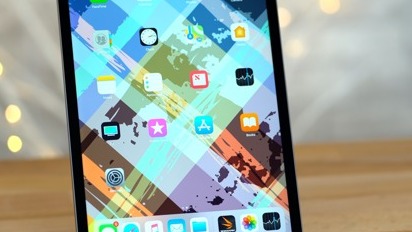 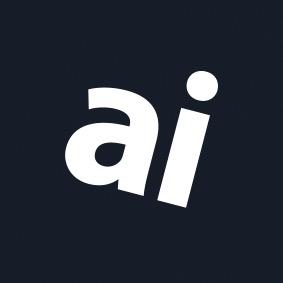 The new 2018 iPad Pro is a marvel of engineering, with a brilliant new design and a chip so powerful that it gives even the most premium laptops a run for their money. AppleInsider takes a closer look at its performance, to see if it is worth getting the new model, or buying 2017 10.5-inch iPad Pro at a discounted price.
By Vadim Yuryev | 4 years ago
19 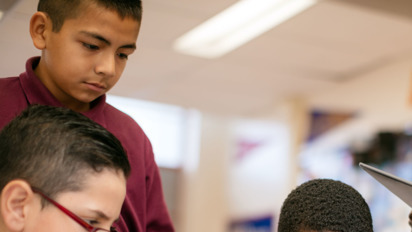 Apple's iPad lineup got bigger and more expensive than ever in 2017, with the introduction of new high-end Pro models. But the company also pivoted and introduced a budget-priced 9.7-inch model that marks the most affordable entry price for an iPad ever. The combination helped sales return to long-awaited growth.
By Neil Hughes | 5 years ago
28 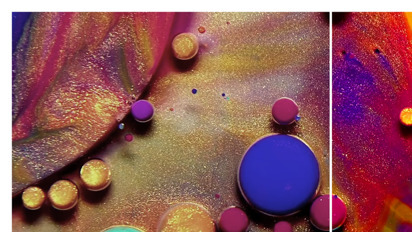 Popular streaming video service Vimeo has updated its official iOS and tvOS apps to take advantage of Apple's recent support for high dynamic range video across its platform of devices, including the iPhone X.
By Neil Hughes | 5 years ago
1 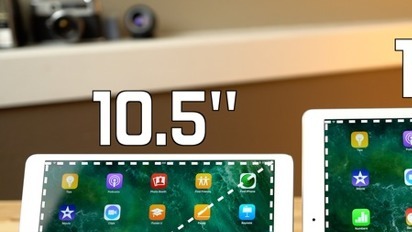 This year's iPad Pro lineup is bigger than ever, with the smaller model making a jump to a 10.5-inch display. Choosing between it and the jumbo-sized 12.9-inch iPad Pro can be difficult, but AppleInsider is here to help.
By AppleInsider Staff | 5 years ago
14 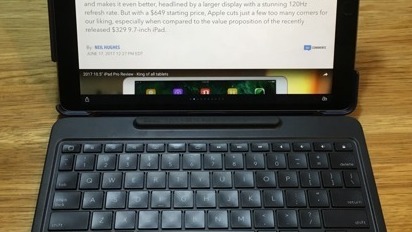 Logitech's Slim Combo keyboard for the 10.5-inch iPad Pro is a welcome addition to Apple's limited Smart Connector accessory lineup, and a good option for someone who wants to use their tablet as a traditional laptop replacement. The design is largely a mixed bag, however, that will appeal to some and turn away others.
By Neil Hughes | 5 years ago
11 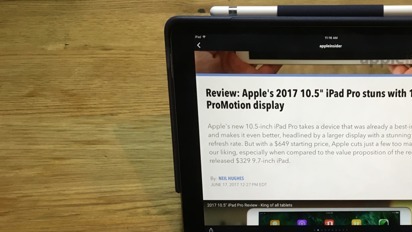 The latest option in the slowly growing lineup of iPad Pro Smart Connector accessories is Logitech's new Slim Combo keyboard, which offers the convenience of a physical keyboard with the ability to easily detach and use as a tablet. AppleInsider offers a closer look.
By Neil Hughes | 5 years ago
24 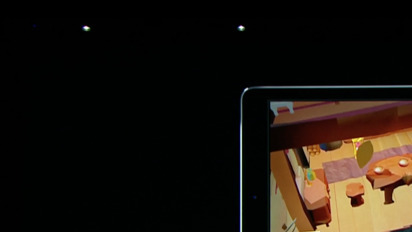 Apple has a long history of introducing groundbreaking technology in one device, only to gradually carry it over to the rest of its product lineup in the ensuing years. With that in mind, the newly released iPad Pro with 120Hz ProMotion display could hint at the future of Apple's portable devices — particularly as the company pushes into augmented reality and virtual reality.
By Neil Hughes | 5 years ago
12 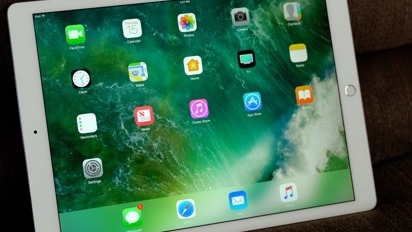 Staggered launches of the first generation of iPad Pro tablets left the larger 12.9-inch model in an awkward position, lacking key professional-grade features like always-on Hey Siri and a color balancing True Tone display. Apple has rectified that with its 2017 12.9-inch iPad Pro, bringing it up to speed with the smaller 10.5-inch version with a simultaneous release.
By AppleInsider Staff | 5 years ago
30 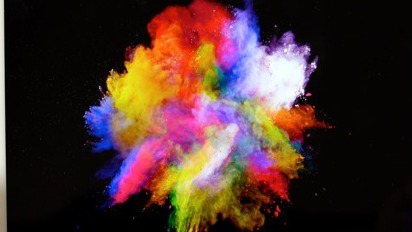 Apple's new 10.5-inch iPad Pro takes a device that was already a best-in-class tablet and makes it even better, headlined by a larger display with a stunning 120Hz refresh rate. But with a $649 starting price, Apple cuts just a few too many corners for our liking, especially when compared to the value proposition of the recently released $329 9.7-inch iPad.
By Neil Hughes | 5 years ago
97