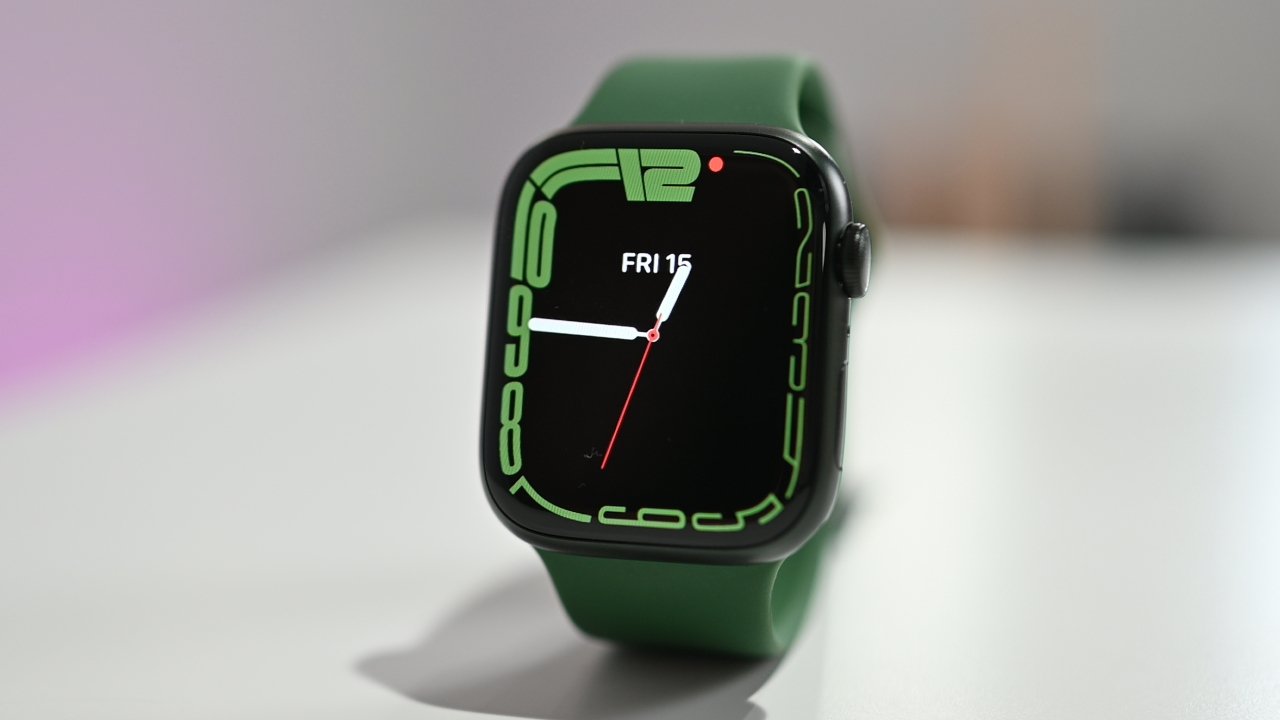 The Apple Watch Series 7 has a bigger, brighter, and tougher display that extends all the way to the edge of the device. There isn't any flashy new gimmick or headlining health feature in this model, but there are still a handful of changes worth exploring. New colors, faster charging, and exclusive edge-to-edge watch faces add up to an iterative, yet desirable upgrade.

The Apple Watch Series 7 retains the same design elements that have been present since its first iteration. Despite rumors of a flat-edged redesign, Apple doubled down on rounded sides and added a bigger, brighter display.

The Apple Watch has matured over the years into a health and fitness product, though Apple still pushes some social aspects. Each release has had some prominent feature attached to it, though this model is admittedly more iterative than Apple's previous generations.

Rather than add some gimmicky new feature or sensor, Apple positioned the Apple Watch Series 7 as the epitome of its wearable revolution. It acts as the absolute maximum representation of what can fit in a comfortable wrist computer.

A redesign is still possible in the future, but for now, Apple had to consider what changes it could make in an aging design without compromising existing features.

Notably, Apple has managed to introduce yet another Apple Watch that retains compatibility with all watch bands. Apple initially leaned heavily into the fashion aspects of the Apple Watch, which has persisted through the constantly changing band styles. 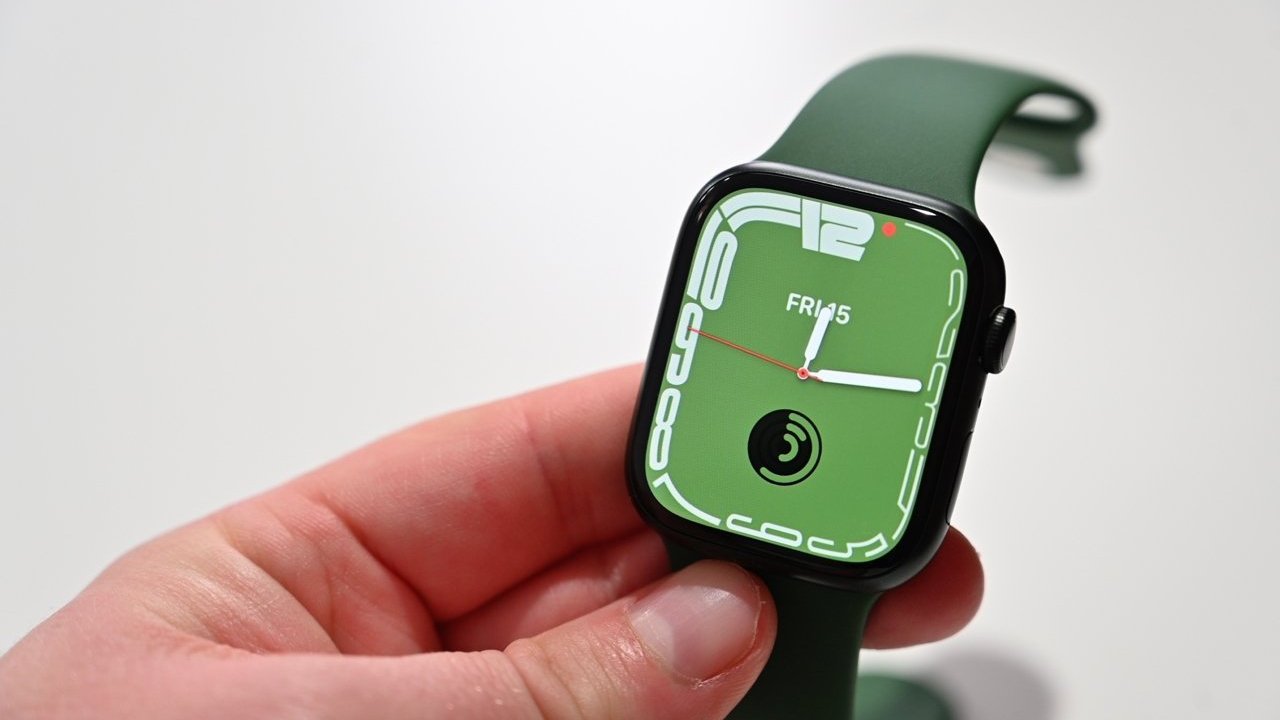 The display is larger and tougher than before

Apple pushed the display over the edge of the Apple Watch frame for 20% more screen real estate than its predecessor. Those upgrading from the Apple Watch Series 3 will see a 50% increase in display size while only increasing case size by 3mm.

The display is also 70% brighter when the always-on display is dimmed. This means information is more visible at a glance, even in a bright environment.

Many apps offered by Apple have been reconfigured for the larger display as well. For example, Calculator has bigger buttons, text messages show more content, and there is now a full-sized keyboard useful for swipe typing.

Apple says the display used on the Apple Watch Series 7 is the most durable one yet. The glass cover is thicker at its highest point, which makes it more resistant to cracks. 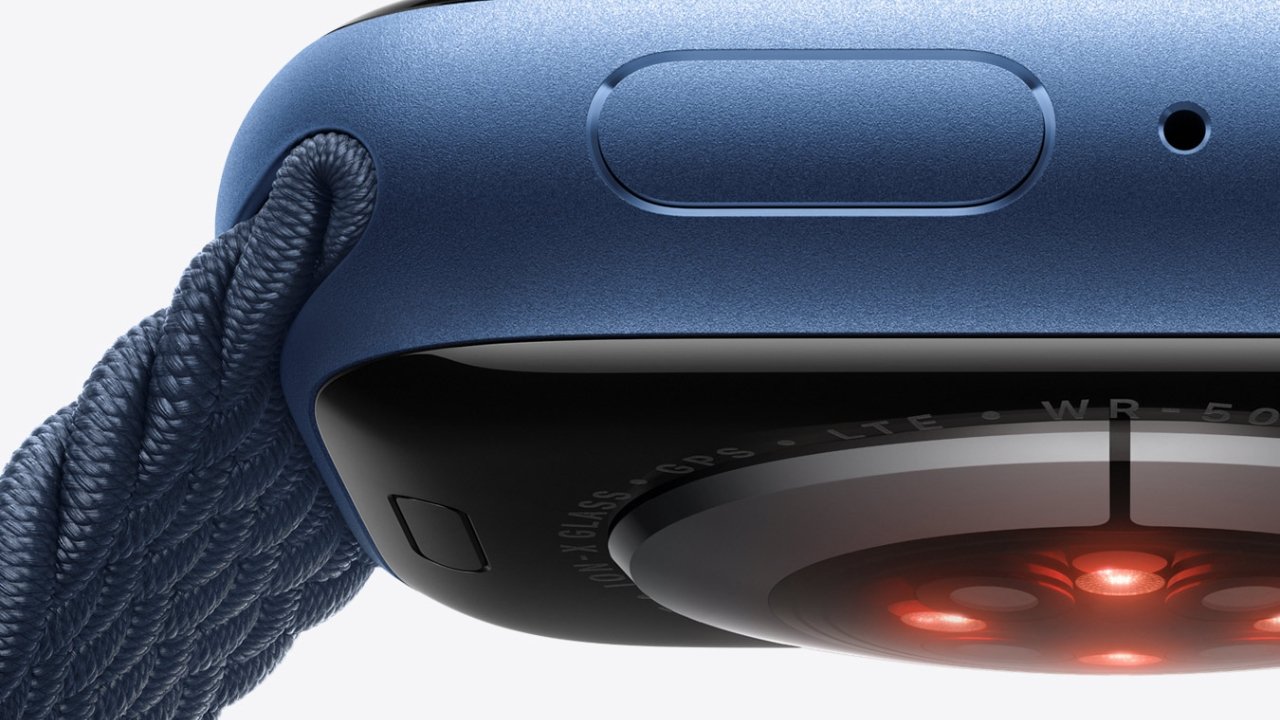 The primary health feature that ties to every health and fitness metric is heart rate. The infrared sensor on the back of the Apple Watch regularly measures heart rate and records its findings in the Health app.

If the user isn't moving around for about a minute, an alarm starts counting down. As long as the Apple Watch is connected to a cellular network or an iPhone, it will notify emergency services if you're unable to.

This feature is enabled by default for users over 55, though it can be manually toggled on for users 18 or older.

The Apple Watch will record decibel levels in any environment, and if enabled, will warn the wearer of dangerously loud noise. A complication is also available so users can view the decibel level at a glance.

A twenty-second timer will start any time Apple Watch detects the user is washing their hands. The feature was added during the pandemic to encourage healthy habits.

The Apple Watch also tracks sleeping habits by default. So if you wear your Apple Watch to bed, it will measure the quality of sleep based on a combination of metrics gained from the health sensors. 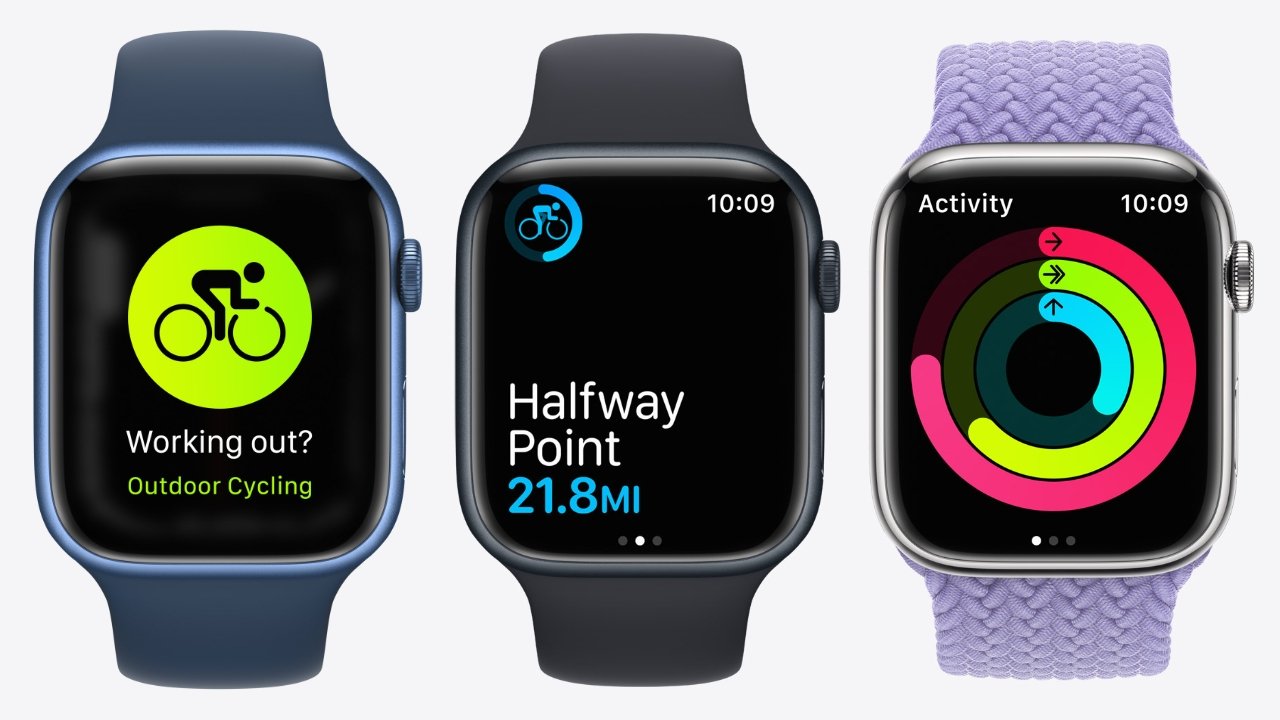 Track workouts and compete with friends in the Fitness app

Fitness has become an important staple of the Apple Watch — Fitness+ was even built around it. Track your workouts, from walking to swimming, all with a simple tap.

Automatic workout detection has improved as Apple updates its algorithms in watchOS. With watchOS 8, users will be able to automatically start a cycling workout thanks to a combination of sensors detecting the activity.

The algorithms have also been tuned to measure calories accurately when using an e-bike. It can determine if pedal-assist is active or if the bike is moving on leg power alone.

There are many workouts users can initiate from the Fitness app on Apple Watch. They include cycling, swimming, core, HIT, and even hiking. New workouts coming in watchOS 8 include pilates and yoga.

Apple says the Apple Watch Series 7 has the same 18-hour battery life as its predecessor. However, the charging capabilities have been improved with much faster charge times.

When connected to sufficient power, the Apple Watch will charge 33% faster, translating to eight hours of sleep tracking with just eight minutes on a charger. Apple says the battery can reach 80% in just 45 minutes.

Apple didn't delve into the processor, but it is a new S7 SiP. The core processor remains the same as the S6, though there's more to the chip than just the processor. The expanded capabilities for the display, fall detection, and more could easily warrant a next-generation package, hence the S7.

There is still an LTE option available for Apple Watch. It requires a cellular plan from a carrier but will likely be included in your iPhone plan for a small monthly fee. 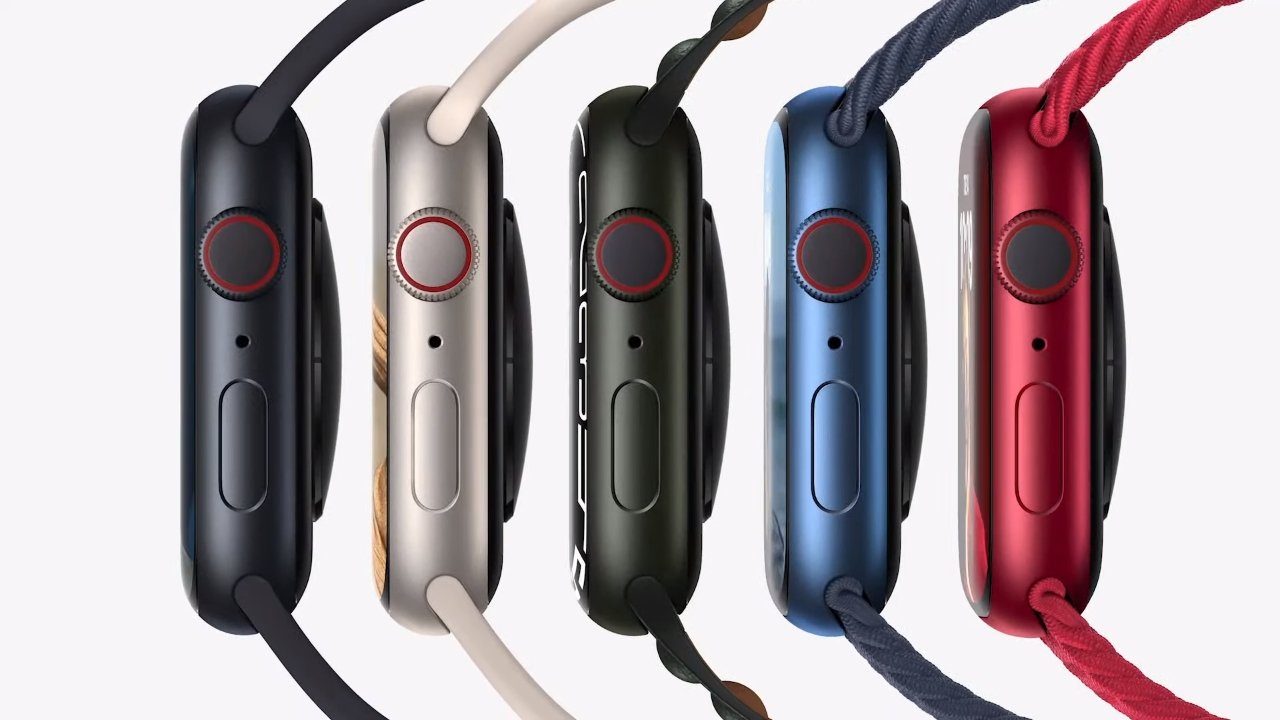 The Apple Watch Series 7 is available in aluminum, stainless steel, and titanium. The only model with new color options is the aluminum model.

The aluminum colors are midnight, starlight, green, blue, and (PRODUCT)RED. Stainless steel is available in silver, graphite, and gold. The titanium model retains its space black and standard titanium color.

The Apple Watch Series 7 didn't contain a significant number of updates, but we believe the larger display makes it a compelling upgrade and the best smartwatch you can buy. The bigger case, edge-to-edge display, and curved glass make this watch look striking compared to the big-bezel predecessors.

Apple didn't include new health sensors, didn't upgrade the processor speed, or add new cellular technology as it has in previous models. Battery life remains the same, but the Apple Watch can be charged at a much faster rate with the new cable.

The case design is relatively the same, with slightly more curve to the edges and a single speaker slit versus two. The watch band connecting mechanism remains identical to the previous models. 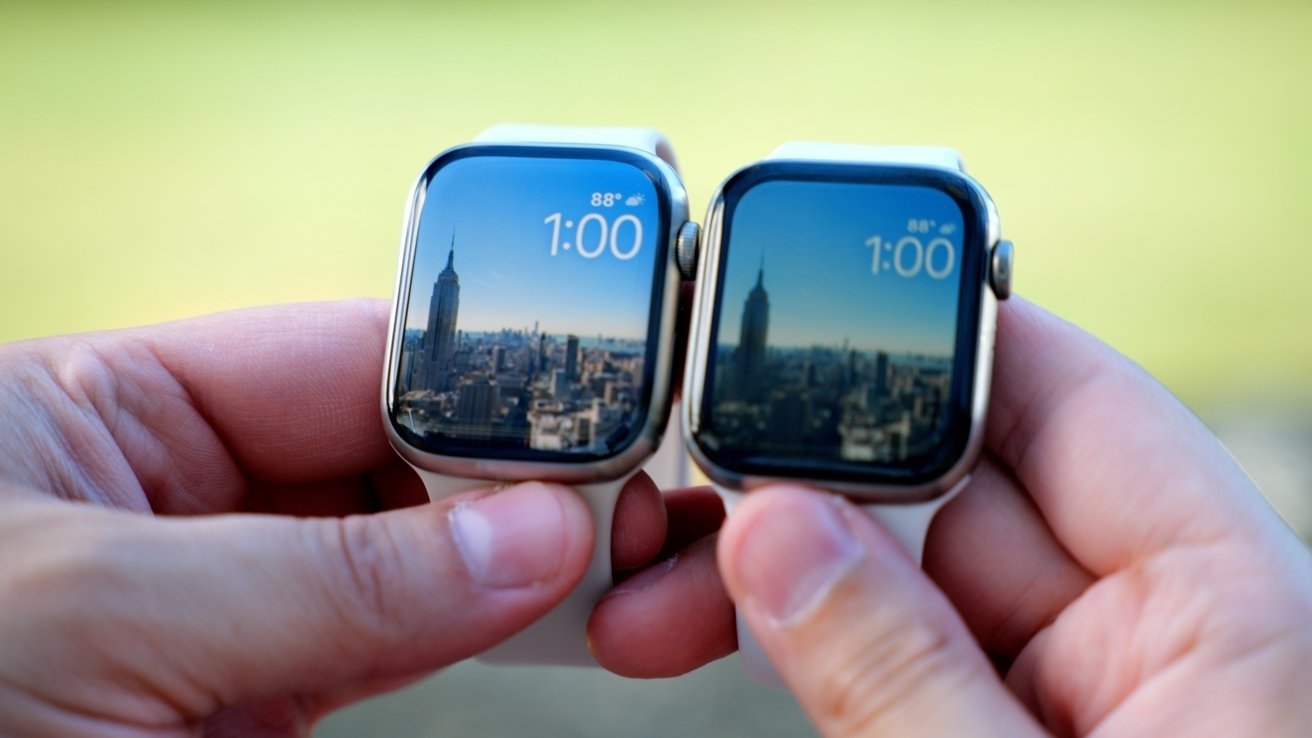 The larger edge-to-edge display is a noticeable upgrade

The real story is the increase in display size and brightness. The display itself is 20% larger and 70% brighter when in always-on mode. When held side-by-side with an Apple Watch Series 6, these upgrades are easily noticeable.

Apple altered the operating system slightly to account for the larger display. The full QWERTY keyboard is simple enough to use by tapping each letter, but it is most useful when swipe typing. We still prefer using dictation via Siri when responding in a pinch.

Two new watch faces were introduced with the new models. Modular Duo is a compelling choice thanks to its two large complications, similar to the Infograph Modular's single large complication. Contour is a more opinionated design with curved letters that stretch over the edge of the curved glass.

Despite a lack of speed upgrades to the processor, everything operated smoothly. Apps opened instantly and navigating the operating system never felt sluggish. 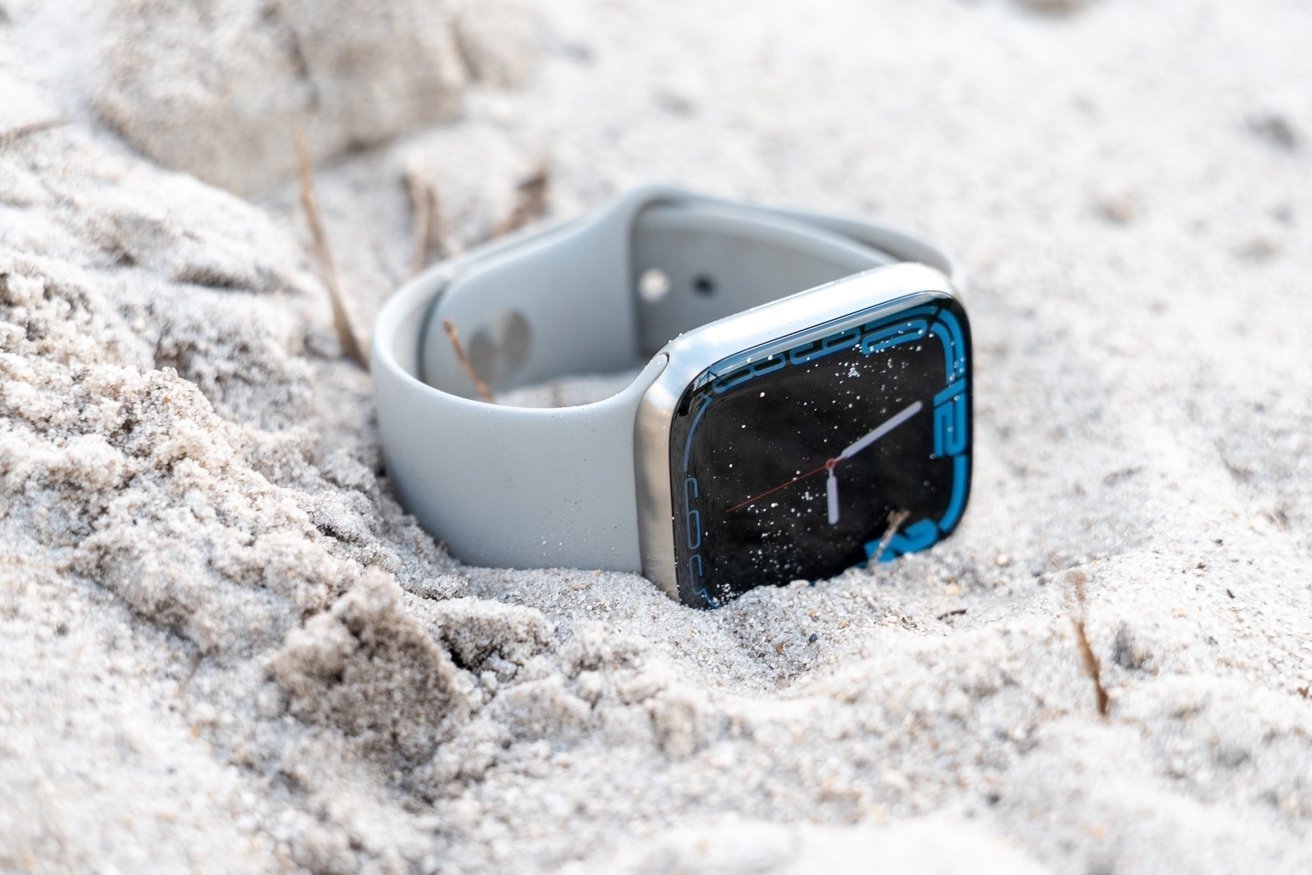 The Apple Watch survived a trip to the dunes

The Apple Watch can charge up to 33% faster than previous models, thanks to 5W fast charging. You'll need the included cable and a 5W or higher charging port to do so.

Fitness aspects are unchanged with the same workout-tracking, heart rate detection, and awards as previous models. Users can take an ECG, notify emergency contacts in the event of a fall, and get abnormal heart rate notifications as well.

We tested Apple's durability and dust-proof claims by taking Apple Watch to the beach. After multiple drops in sand dunes and being nearly buried in sand, the Apple Watch Series 7 showed no signs of damage.

The rumors leading up to the Apple event led many to believe a significant redesign was coming. Everything from a flat-sided watch to new types of bands was expected. 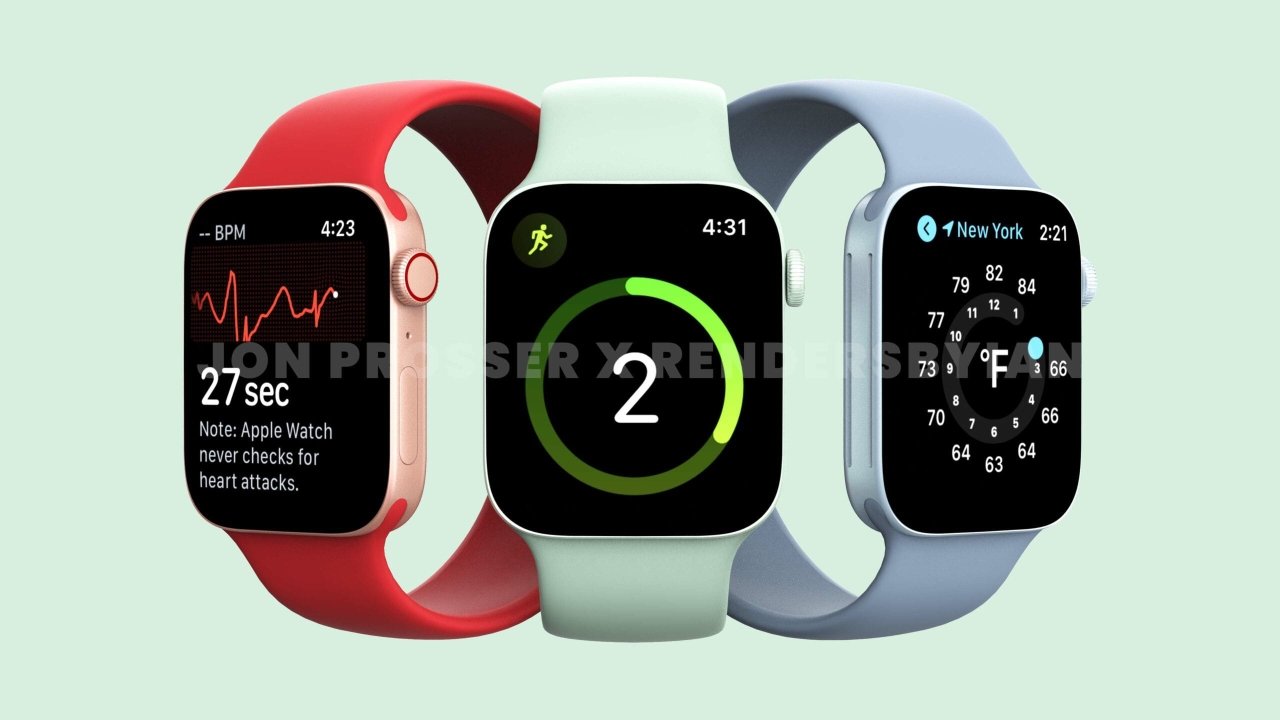 What Apple revealed is almost entirely the opposite of those rumors. Not only is the new Watch more curved, but it also uses the old band style and doesn't have any radical new features.

This trip up is one of the more public failures of the rumor mill. More than one source had been adamant about the new features, yet none of them arrived.

The verdict is still out, however, as some have doubled down. Now rumors indicate the flat-sided redesign is due for the Apple Watch Series 8 in 2022. Apple has also since filed patents that seem to indicate future watches may have flat sides, but this could also be an artifact of how patents are drawn. 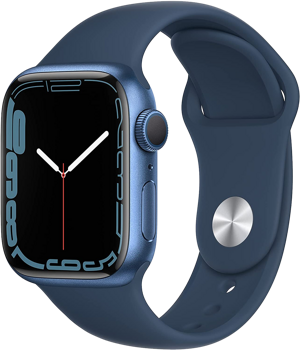 The Apple Watch Series 7 has an Always-on Retina display with nearly 20% more screen area than the Series 6 and the most crack-resistant front crystal yet on an Apple Watch.
On sale at Amazon
Save $330 on 2 at AT&T
Available at Adorama

The Apple Watch Series 7 is priced identically to the Apple Watch Series 6. Some early orders shipped on October 15 with limited in-store availability. The 41mm watch with a sport band starts at $399. Customers can choose between aluminum, stainless steel, and titanium watch cases, a multitude of bands, and whether or not cellular is included. 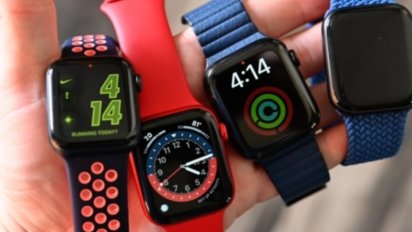 A pair of Apple executives has taken a deep dive into the world of Apple Watch bands — including the company's design philosophy behind them and its focus on backwards compatibility.
By Mike Peterson | 3 days ago
13 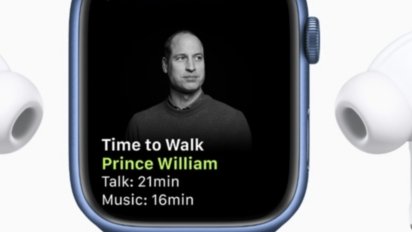 Prince William has been announced as the next "Time to Walk" celebrity guest, with his Apple Fitness+ audio recording also to stream on Apple Music 1.
By William Gallagher | 4 days ago
2 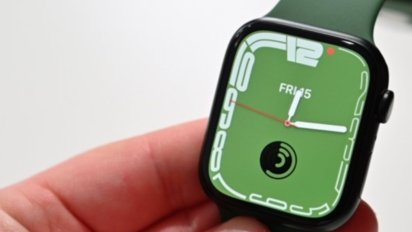 Apple has filed eight public requests for temporary waivers on tariffs affecting both the Apple Watch and specific Mac Pro components.
By William Gallagher | 5 days ago
8 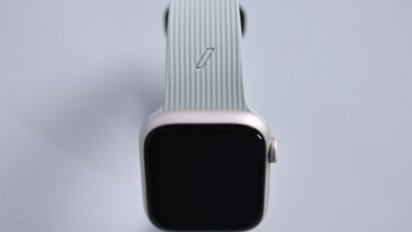 The Native Union Curve Strap for Apple Watch is an absurdly comfortable silicone strap that is both durable and lightweight.
By Andrew O'Hara | 1 week ago
2 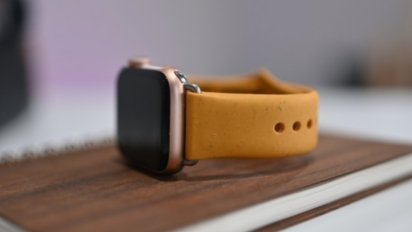 Pela's environmentally responsible Apple Watch bands are a sleek, stylish, and comfortable way to outfit your wrist while also not bringing any undue harm to our planet.
By Andrew O'Hara | 1 week ago
5 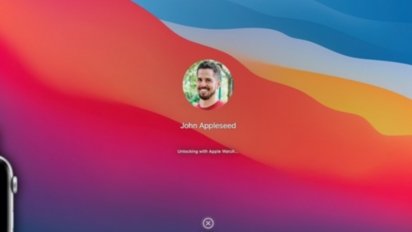 If you're tired of re-entering your password every time you return to your Mac, you can use your Apple Watch to automatically unlock it whenever you are near.
By Amber Neely | 1 week ago 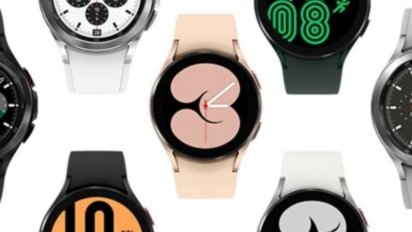 Apple saw its massive smartwatch market lead contract slightly in the third quarter of 2021 as competitor Samsung gained ground with the release of Galaxy Watch 4.
By AppleInsider Staff | 2 weeks ago
6 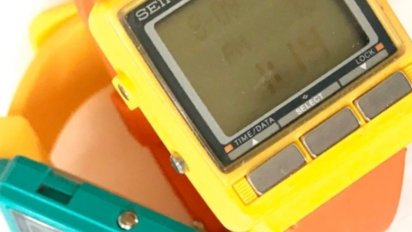 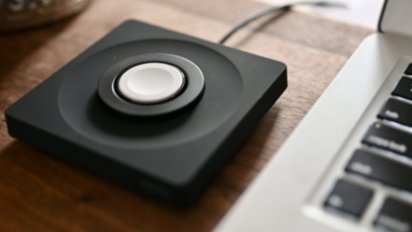 The new Belkin BoostCharge Pro Portable Fast Charger for Apple Watch is the only standalone charger — besides Apple's — to support fast charge on the latest-generation Apple Watch. But it may have promised more than it can deliver.
By Andrew O'Hara | 2 weeks ago
0 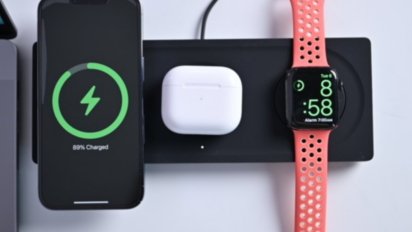 The newly-announced Belkin BoostCharge Pro 3-in-1 is so far the only multi-device charger to provide fast charging wireless capabilities for both iPhone and Apple Watch. Here's what we thought of it.
By Andrew O'Hara | 2 weeks ago
7