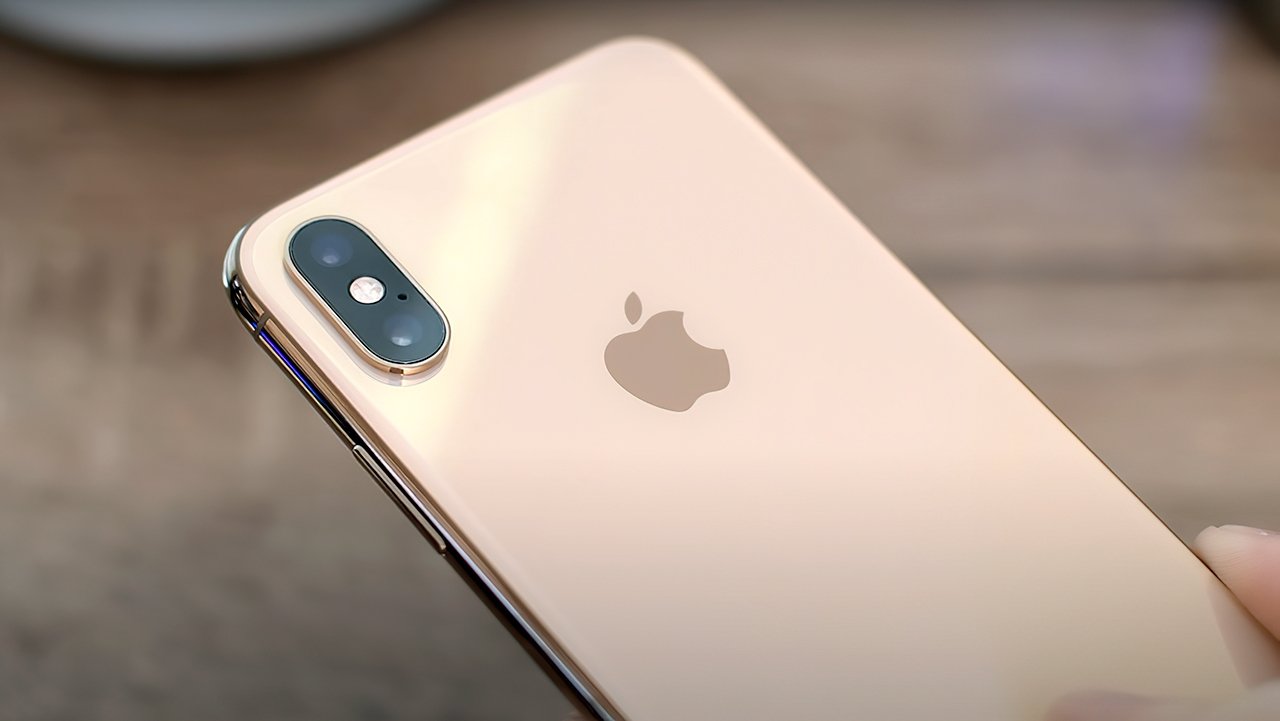 Review: The iPhone XS Max is what Apple has always promised the iPhone could be

The iPhone XS Max was one of Apple's two 2018 flagships. It continued with the full-screen design and Face ID sensors that had debuted the previous year in the iPhone X. It was the first plus-sized iPhone with a full-screen design. As the first iPhone with finer Portrait Mode controls and Smart HDR, its camera was one of its selling features. Apple discontinued it in 2019.

The iPhone XS Max was the larger of Apple's two 2018 flagship phones. It was the first plus-sized model in Apple's all-screen phone line. Compared to the previous-generation iPhone X, the iPhone XS series included a faster A12 Bionic chip and better cameras. Apple discontinued the device the following year when the iPhone 11 Pro Max replaced it.

Apple positioned the 2018 handsets less as a must-have upgrade for iPhone X owners and more as an entry point for owners of older Touch ID-based iPhones. The iPhone XS series gave those customers the new full-screen design while adding incremental processor and camera bumps over its predecessor. The iPhone XS Max offered those same features for the first time in a larger handset. 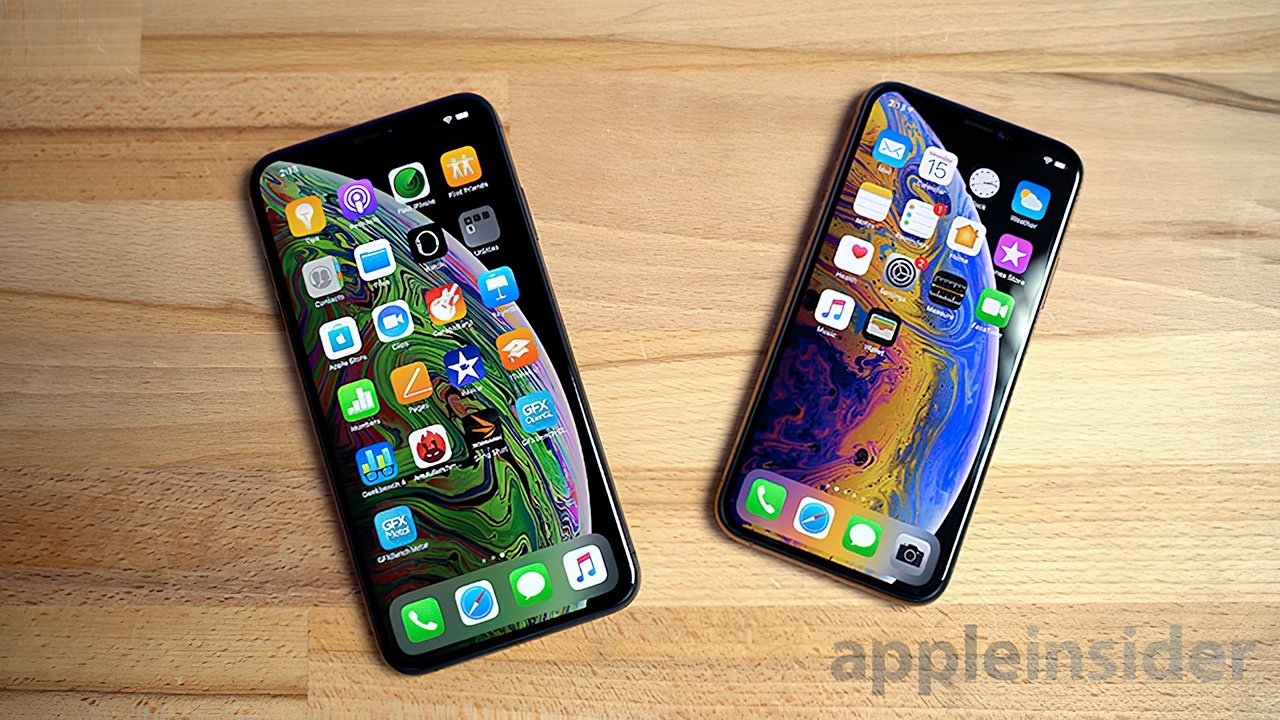 The 2018 iPhones marked the first generation where all of Apple's new handsets had the redesign, including full screen, Face ID, notch, and new home and multitasking gestures.

The phone launched alongside the iPhone XS, its smaller but otherwise identical sibling. The following month, Apple released the cheaper iPhone XR, which had the same A12 chip but a lesser display, camera, and build quality.

The phone has a 6.5-inch edge-to-edge display, Apple's biggest-ever iPhone screen at the time it launched. The lack of a home button required first-time users to learn swipe gestures for multitasking and returning to the home screen. Like the full-screen iPhones before and after it, it includes a notch that houses the front camera and Face ID sensors. 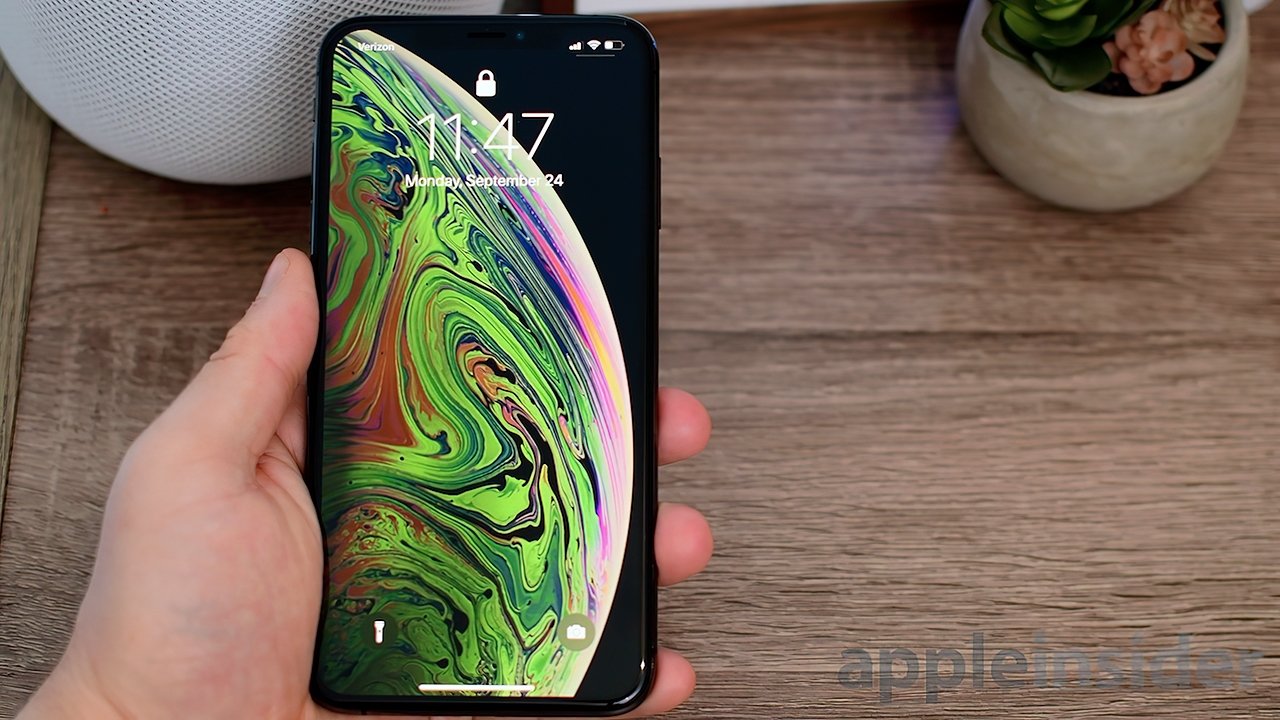 The iPhone XS Max has a 6.5-inch display

Powering the phone is the A12 Bionic Apple Silicon. In addition to general speed improvements, it included an update to Apple's Neural Engine. The eight-core portion of the chip focuses on machine learning, handling up to eight times more operations-per-second than the previous Neural Engine. 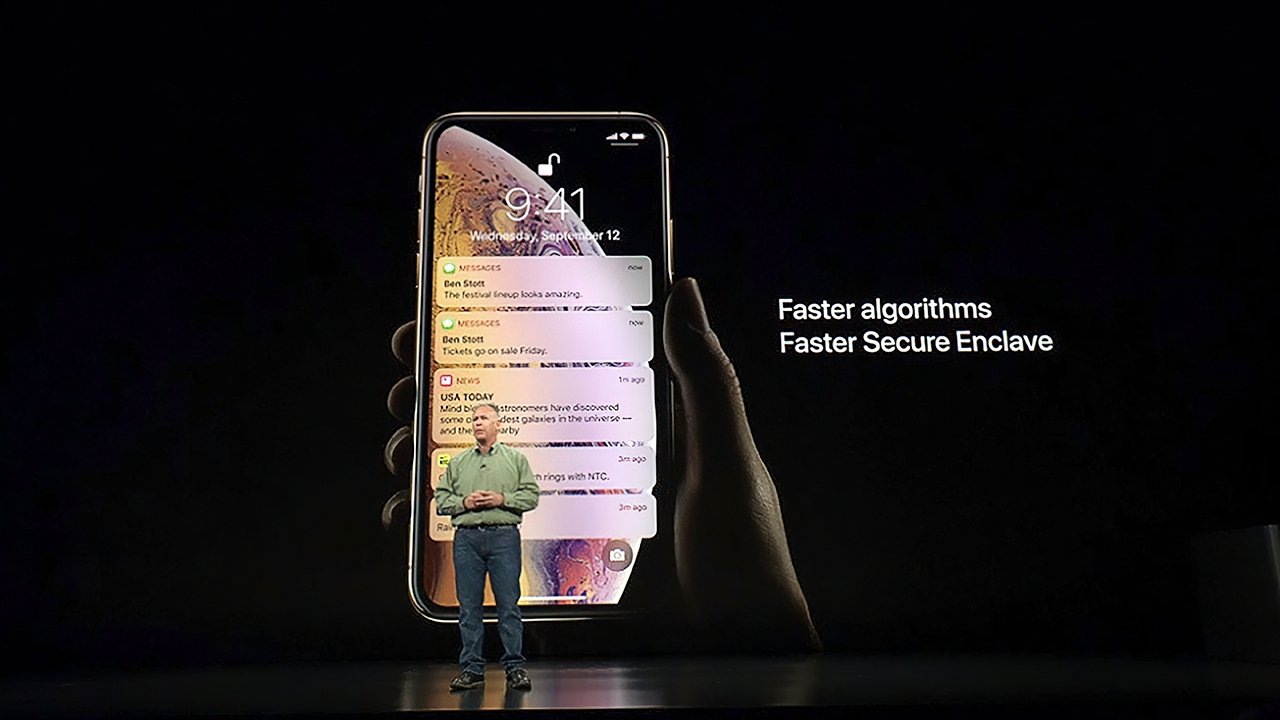 The A12 Bionic has a four-core GPU that's 50% faster than the A11's graphics. The iPhone XS Max's chip also included a faster Secure Enclave that speeds up Face ID recognition compared to the iPhone X.

The handset's camera specs were virtually identical to those of the iPhone X, but the dual-camera system offered subtle improvements over its predecessor. While it stuck with a wide-angle lens and a 2X telephoto lens, they had larger and faster sensors, bigger pixels, and an improved image signal processor (ISP). 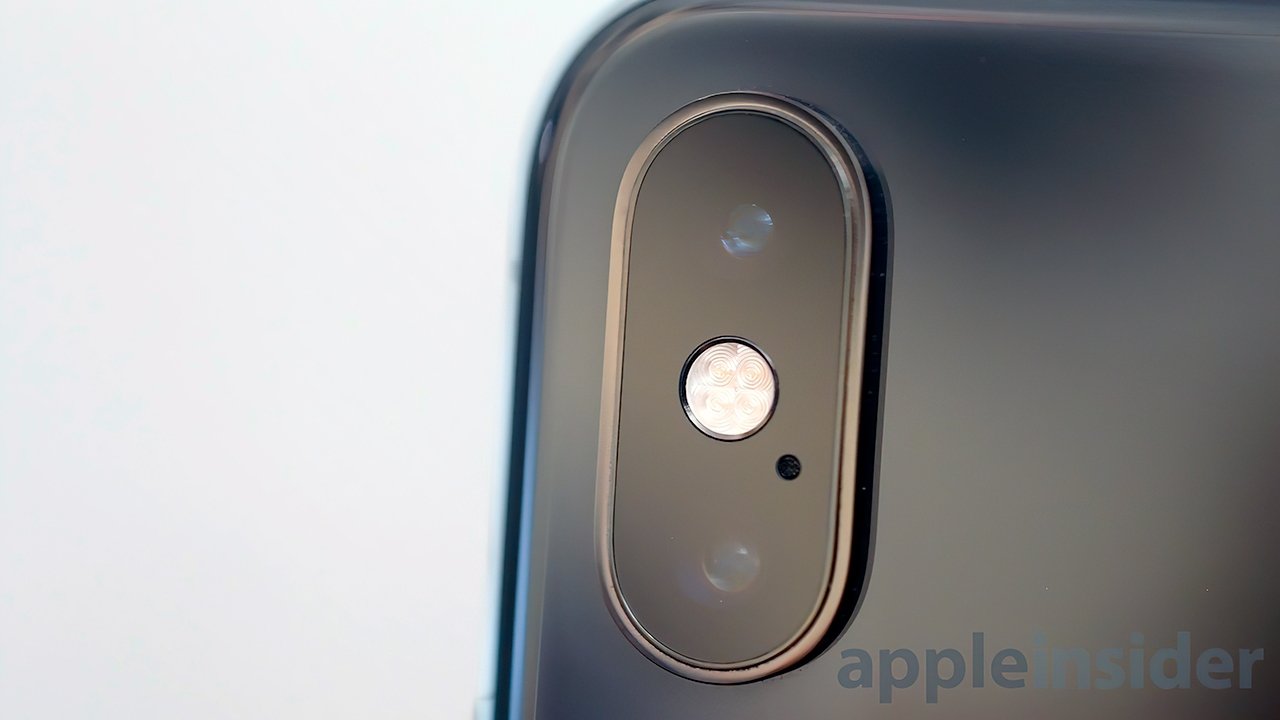 The iPhone XS was the first generation to support Smart HDR. It rapidly fires off multiple shots unseen to the user, applying machine learning through the Neural Engine to keep each image's best portions. The result is a single photo with a wider spectrum of light and dark areas than any single picture could have provided. All of this happens in the background at close to real-time, taking a few seconds at most.

The handset was also the first to include bokeh and depth controls for Portrait Mode. After taking a Portrait Mode shot, you can adjust the background-blur level and apply portrait effects like studio light and contour light. 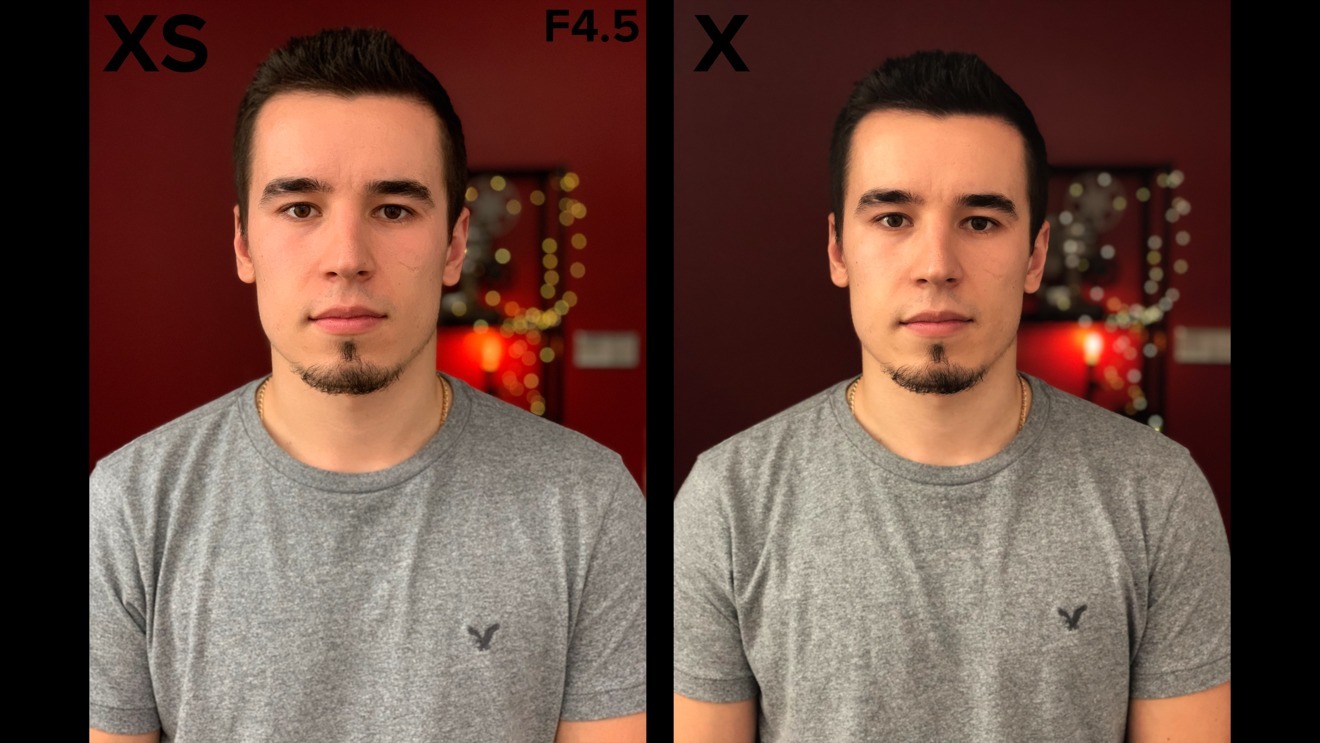 The rear cameras are both 12MP. The wide lens has ƒ/1.8 aperture, while the telephoto lens is ƒ/2.4. It can record video in up to 4K resolution at up to 60fps.

Initially, the iPhone XS series sparked a minor controversy dubbed "Beautygate," where customers noticed a strange beauty-filter type of appearance in their selfies. The front camera was over-applying noise reduction to Smart HDR shots, creating the appearance of excessively soft skin. Apple eventually fixed this in a software update. 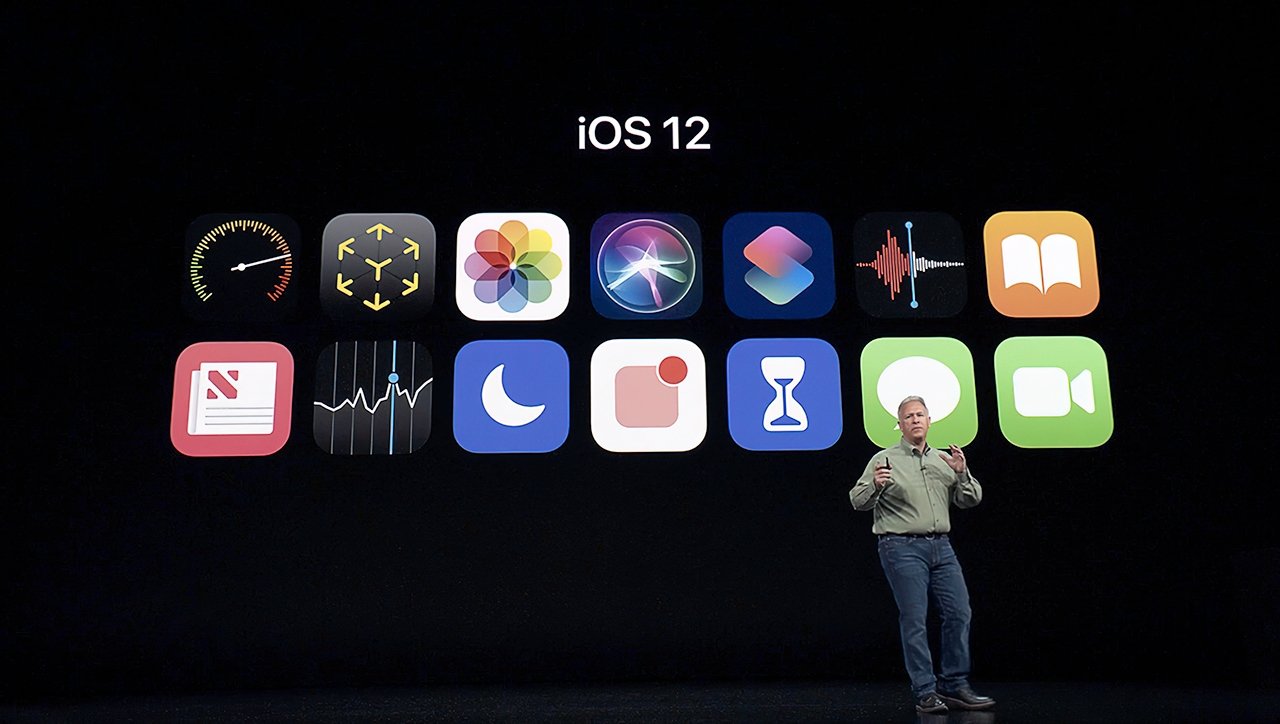 In AppleInsider's review, we gave the phone 4.5 out of 5 stars. 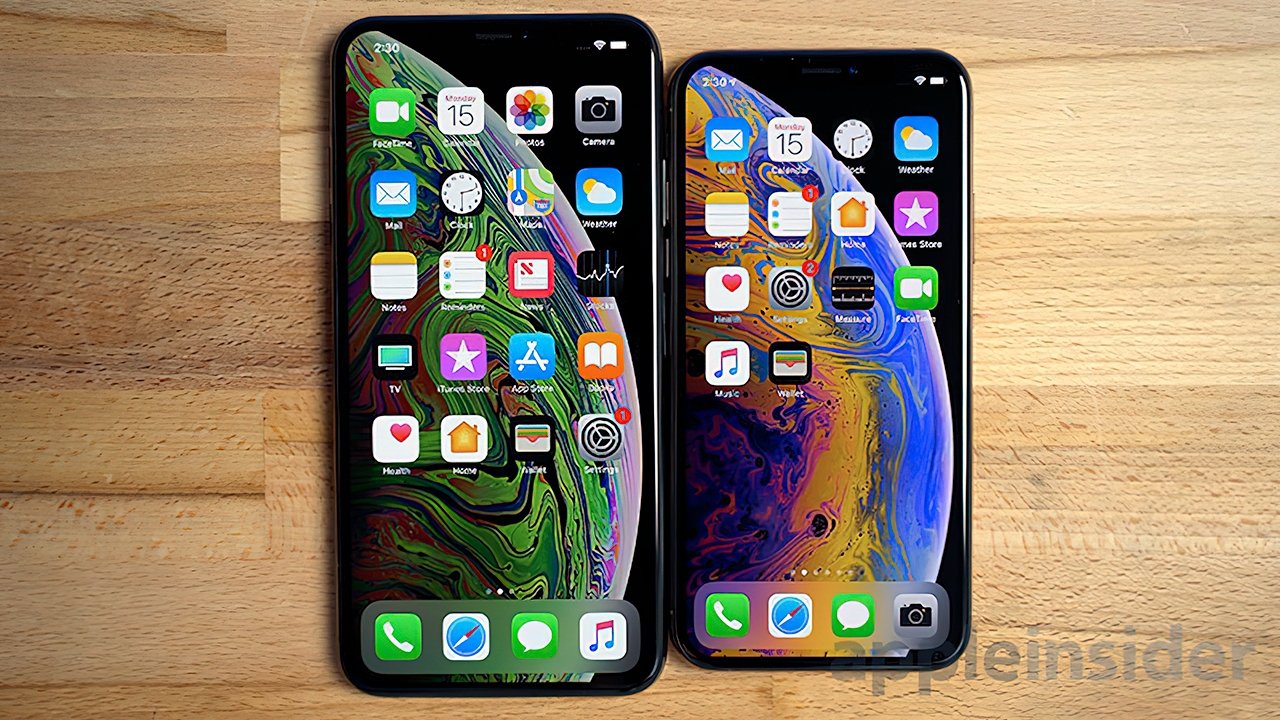 AppleInsider gave the phone 4.5 out of 5 stars

"This is an 'S' model year, and you'd think that there wouldn't be big changes. On the outside, other than the size of the iPhone XS Max, that looks to be true — there aren't a lot of big design changes. We've still got a notch and how much of a problem that is, is an exercise for the reader, and there's still an edge-to-edge OLED screen.

"As with nearly everything, it's what's on the inside that matters.

"The most obvious upgrade is the new, beautiful 6.5-inch display. Colors are vibrant, videos look great even if they do either get cropped in or show black bars, and touch sensitivity is as good as ever.

"We got improved speakers this year, notably with a better represented 3D soundstage. When we played back music and movies, there were times we noticed a difference, and others we didn't.

"The biggest change to audio is probably to the quality of the speaker audio coming out of the grill positioned in the True Depth Camera. This better speaker audio comes with the ability to finally record stereo audio in videos, which is the bigger deal for us." 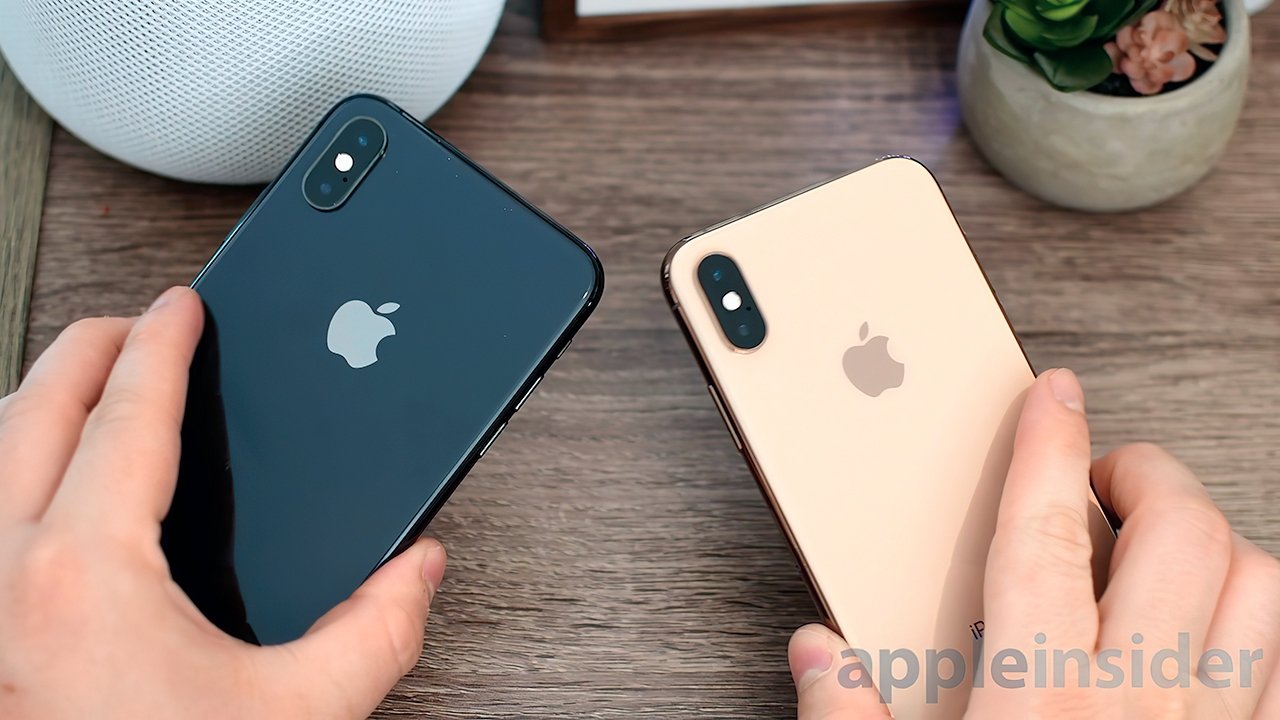 The iPhone XS Max (L) with the smaller iPhone XS

"How the handset feels in our hands is far and away the question we get asked the most.

"There have been jokes made about how massive the phone actually is. Here's the thing, though — it's actually a hair smaller than the iPhone Plus models, but a bit more dense. Sure, anyone with a smaller hand might struggle carrying this thing about, but no more so than they might have with the Plus line of phones introduced with the iPhone 6 Plus.

"The weight of the iPhone XS Max is largely due to the stainless steel frame rather than the aluminum. The glossy stainless sides and glass facing sides have a somewhat slippery finish, so the weight can either give you a little extra feedback to help you hang on to it, or be a problem making it drop from a hand more often, user depending. Throwing a case on can also alleviate the slipperiness, but if you have a tendency to 'go naked' and eschew protection, it could possibly be an issue.

"Fortunately, the iPhone XS Max and iPhone XS have feature parity, including screen quality. There is no obvious feature you get by going with the 6.5-inch model over the 5.8-inch iPhone XS other than screen area. The only exception to this is Apple claiming a slightly increased battery life which we aren't really seeing in actual use, but with the ubiquity of wireless chargers and MFi battery cases, this isn't much of an issue."

"If you need just a few words about the camera it is this — it is better than the X, but not necessarily enough to warrant a whole upgrade on its own.

"What is new this year, is the pixel size. On the wide-angle camera, the larger sensor is equipped with a 1.4-micrometer pixel pitch, increased from 1.22-micrometer on the year ago sensor. By increasing pixel depth by nearly 20-percent, it allows the pixel to capture more light, helping with low-light photography.

"Apple has also coupled the updated eight-core Neural Engine with the A12 Bionic to help master photography. Apple says that this helps with things like facial recognition, facial landmarks, and image segmentation during Portrait Mode photos.

"We immediately noticed quicker shutter speeds, and no lag when we went to take photos. When we shot in Portrait Mode, it was able to enable the Portrait effect quicker and identify the subject in less time that on our X.

"We took to the outdoors to get some sample photos and were pretty impressed. The photos look outstanding on their own, but when we compare certain ones to the X, there is both more and less difference. 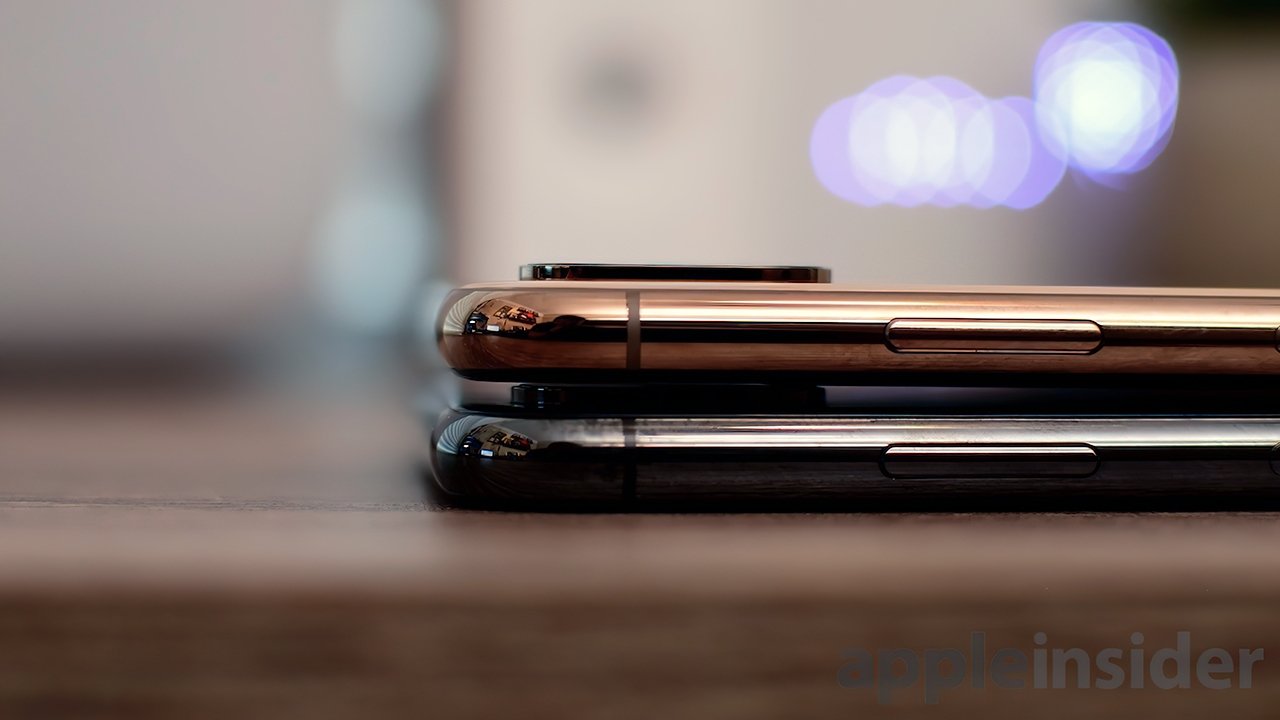 Apple introduced a new gold color option with this generation

"When we max out the digital zoom to 10X, we notice that the iPhone X actually has a bit more detail. The Neural Engine smoothing effects in the iPhone XS appear to be a bit more aggressive in an attempt to make a more pleasing picture. When you are in fact shooting something that is supposed to be a bit more sharp — like these cliffs or a building — you don't necessarily want so much smoothing going on.

"When we talked about specs, we said that these deeper pixels should help low light performance, and that appears to be exactly what has happened. Low light shots do appear a bit brighter, even when not using the flash.

"Speaking of the flash, that too got an update. The updated True Tone flash should help photos look more natural, but we use the flash so seldom it was hard to really tell. Looking at them externally, you notice it isn't quite as pink on the two lower LEDs, but otherwise it seems quite similar." 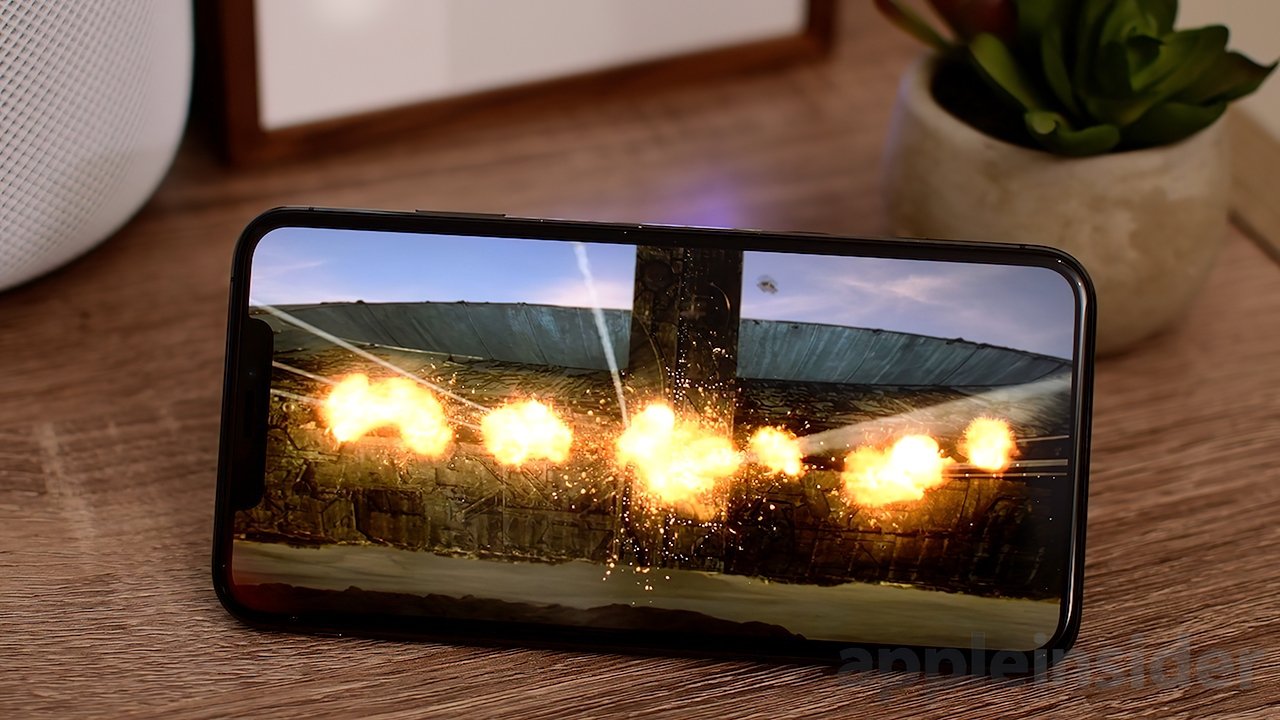 The most obvious upgrade is the beautiful 6.5-inch display

"Apple has done a great job with the new phone. It is quite frankly, the best iPhone Apple has ever made. That statement doesn't carry much weight though, as every year Apple introduces to the world the 'best iPhone' they've ever made. It is as true this year as it was last year.

"It still is at its core, an iPhone. If you've been fans of the iPhone in the past, you will certainly love the latest model. It has the most tech ever packed into an iPhone that, seems to be more looking towards the future rather than being perfect just today.

"From a usability standpoint, all the apps that took advantage of the features of the iPhone X all run here on the iPhone XS Max. They certainly load a bit quicker, but for instance, Fortnite is not necessarily any more playable here than on last year's iPhones, nor will Pages complete your task any better than it did before.

"The Neural Engine seems like a set-up for something. Sure, it helps take better pictures now, and we believe it also assists in parallelizing calculations across the A12 cores a bit better than previously, but it feels like untapped potential at the moment.

"Better Siri? Enhanced user security protections? Don't know for sure yet, but it'll be a fun ride."

Apple no longer sells the iPhone XS Max. Some retailers still have stock, but it's now a two-generation-old flagship. The iPhone 12 series offers significant improvements across the board, so the 2018 model is only likely to appeal to shoppers today at a highly discounted price.