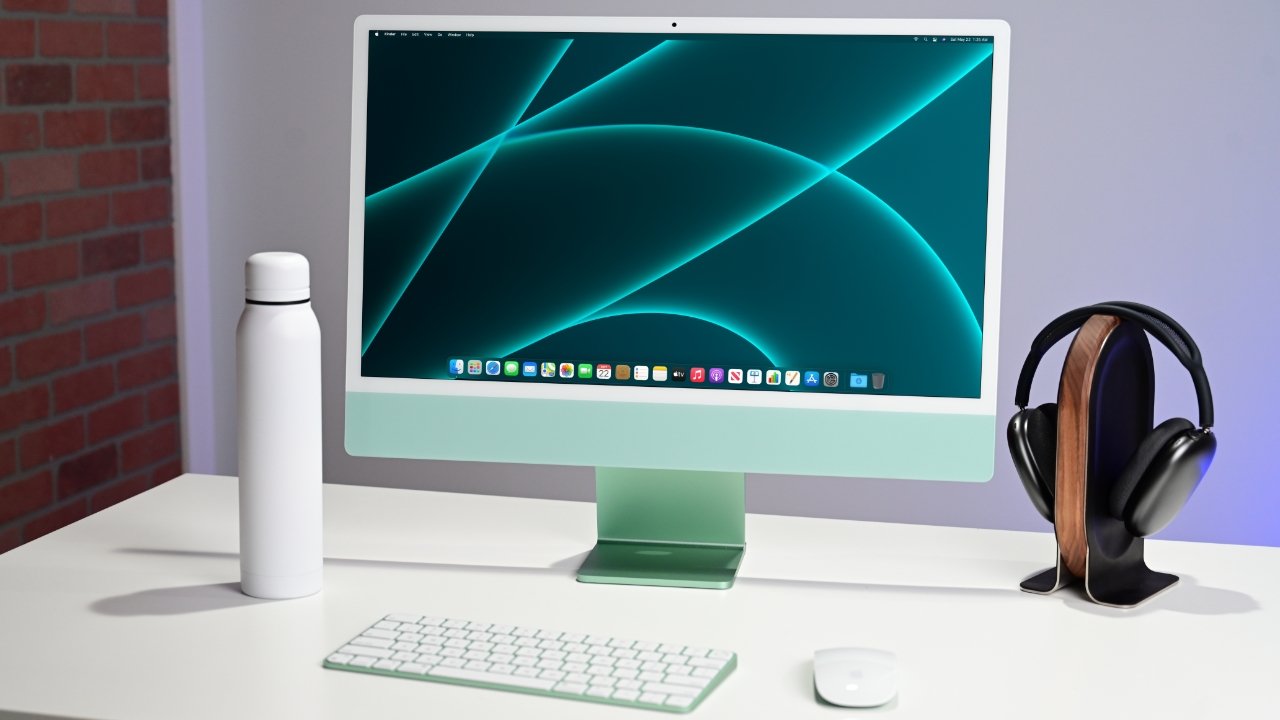 The iMac has utilized the same external design language since its move to aluminum in 2007, but that all may change soon. It is rumored that Apple will introduce an all-new "24-inch iMac" with a design similar to the iPad Pro or the Pro Display XDR running Apple Silicon.

The external design of the iMac has not changed much in 13 years, with minor alterations to screen size or aspect ratio being the most noticeable updates. The new "24-inch iMac" is rumored to break that cycle and offer an all-new design paradigm similar to other modern Apple devices. 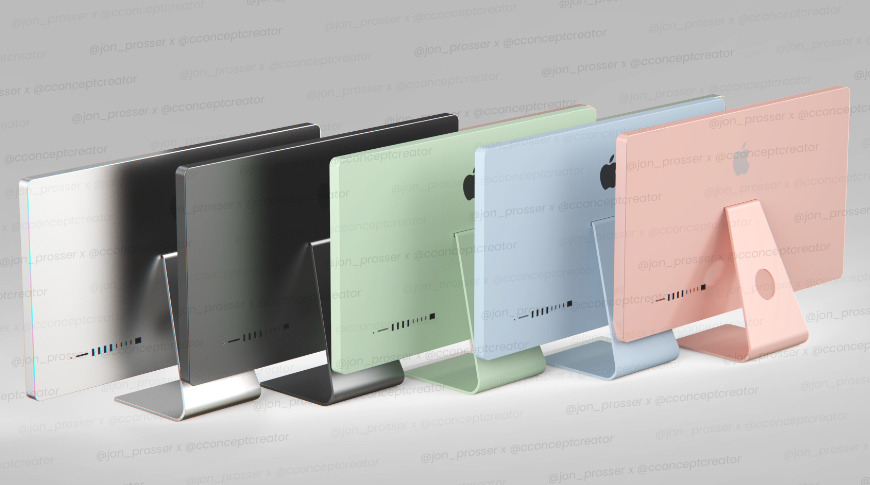 The colorful iMac lineup from @cconceptcreator

Not much is known about this potential all-in-one desktop, but the updates it may receive can be inferred from other product rumors and recent releases. Apple will include an M-series Apple Silicon processor "be it the current M1 or some updated version like an "M1X" or "M2."

The redesign will not be the only news surrounding a refreshed iMac, as other technologies could debut in the machine. Apple is expected to finally ditch spinning disk drives altogether and maybe introduce mini LED technology.

Ming-Chi Kuo suggests that the newly designed "24-inch iMac" will have an ARM chip and release sometime in 2021. He reported that Apple Silicon would drive prices higher due to technology changes and supply issues, but that was not the case when the first Macs with M1 processors launched. 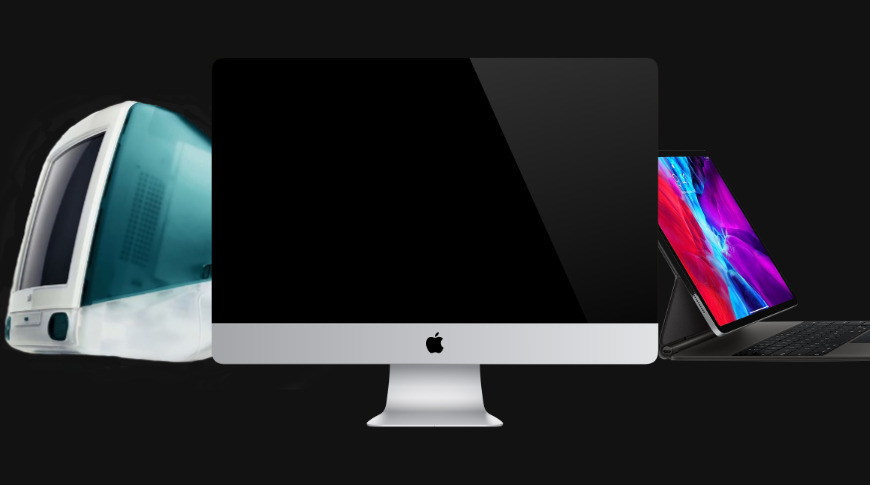 The iMac is an all-in-one desktop PC with all of its computing components tucked away behind the screen. This means that Apple has had to work with an increasingly high thermal load in the same hump-back casing. The shift to Apple Silicon brings new challenges but will likely allow for much simpler cooling systems due to a much smaller thermal overhead.

The iMac Pro changed the internals entirely, allowing for better airflow and quieter fans, but the thermal limitations still exist in that design. The redesign is expected to take on elements of the iPad Pro or the Pro Display XDR, both of which reflect Apple's modern design philosophy, and apply the better cooling methods Apple learned from building the iMac Pro and Mac Pro.

The iPad Pro saw a significant redesign in 2018 that removed the home button and chin in favor of a nearly bezel-less display, Face ID, and flat sides. If the iMac does shift to a similar design, it will mean pushing the 21.5-inch display out to 24-inches by removing the large bezels and chin. 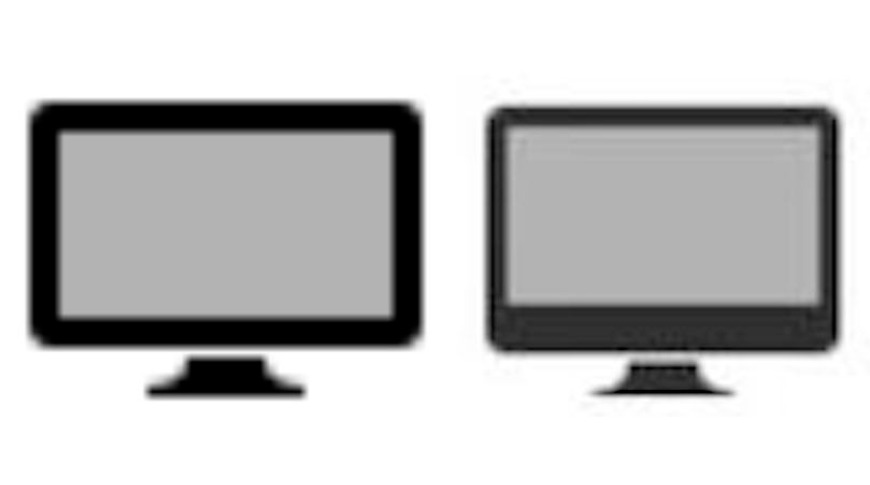 A Twitter user with the handle "iFinder" posted the icons found in leaked iOS 14 code, which indicates a change to the iMac form factor. The bezels indicated by the icon do seem more uniform, but not as thin as rumors suggest.

The "24-inch iMac" with similar design aesthetics could make for a good-looking machine, but compact enclosures face challenges with cooling. The iPad Pro – and any Apple Silicon iMac – won't have the same cooling needs since it is using ARM at a much lower computing-power-per-watt metric.

The well-known leaker Jon Prosser shared some concept images of the 24-inch iMac in late February 2021. It showed the lineup with colors similar to the iPad Air. 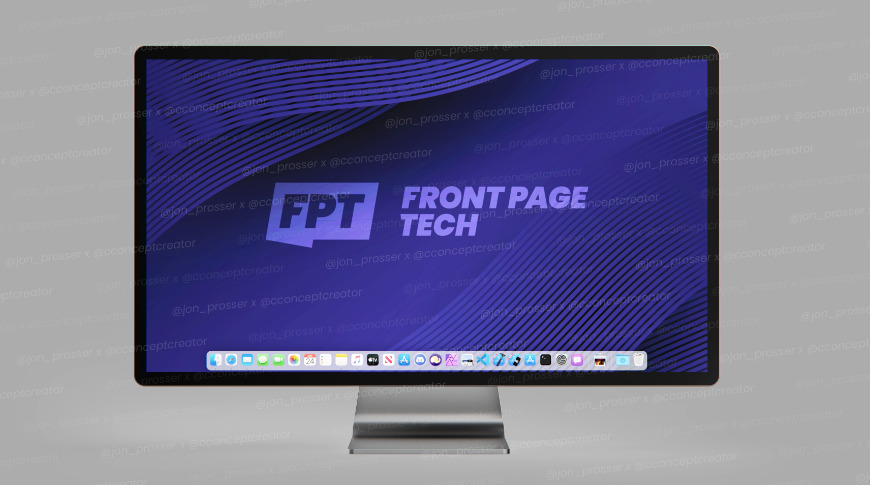 An edge-to-edge iMac render from @ccomceptcreator

Like with the previous major iMac refresh, only one model will likely be updated in the first year, with the other model's update coming later. Rumors point to a 24-inch display, meaning the smaller 21.5-inch iMac will get the redesign first. A later update to the larger 27-inch iMac could mean a display as large as 30 inches is in the works.

There is little reason for the resolution to change for the larger display, as 4K at 24 inches will maintain the Retina pixel density. However, Apple could use the improved color-accuracy technologies, found in the Pro Display XDR, in the "24-inch iMac."

Reports from Ming-Chi Kuo suggest a move to mini LED across the Mac line, which would allow for better contrast and color recreation closer to the performance of OLED.

Apple Silicon came out of the gates with shockingly good performance and efficiency in the late-2020 MacBook Air, 13-inch MacBook Pro, and Mac mini. As Apple moves forward in its two-year transition to Apple Silicon in Macs, it's unlikely the company would include 10th-generation Intel processors in redesigned iMacs. Apple still sells Intel-based models of the 13-inch MacBook Pro and Mac mini, but they're last-generation models filling the higher-end tiers until Apple releases Apple Silicon that's even more powerful than the M1.

A rumor from earlier in 2020 says Fusion Drives will be abandoned in this model. Apple has moved to SSD-only configurations in every other computer it sells, with the iMac being the last holdout. An SSD would improve speeds across nearly every process on the machine as loading apps and documents from storage will be much more responsive.

There are theoretical specs for the "M1X" processor that suggest it will be a huge leap in performance from the M1. It would have a 12-core CPU and 16-core GPU versus the 8-core CPU and 8-core GPU in the M1. It could feature 256 execution units, rather than the M1's 128, and may be able to drive three displays instead of two. 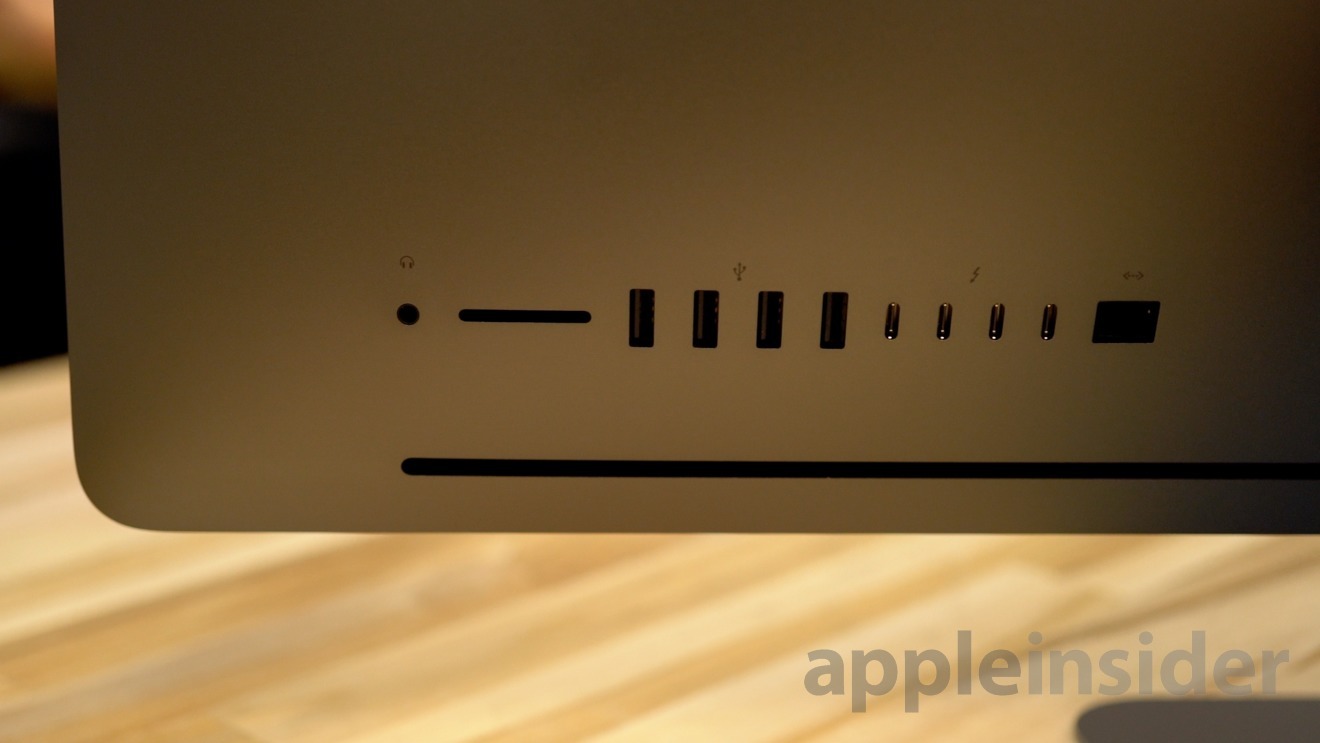 The iMac Pro changed the connectors from USB-A to USB-C with Thunderbolt 3 support. The 24-inch iMac will likely have a similar port arrangement, likely with the adoption of USB 4.

While the Apple Development Kit ships in the physical form of a Mac mini, it does not have the latter's Thunderbolt 3 ports. It isn't clear why this is at this time, but with USB 4 including the Thunderbolt 3 protocol and USB-C physicality, Apple Silicon Macs, including the "24-inch iMac," will likely see compatibility at consumer launch.

The 21.5-inch iMac has acted as a good entry point for first-time Mac buyers. For just $1,299 you got a decent processor, 1TB HDD, and discrete Radeon Pro graphics in a 21.5-inch 4K screen.

Ming-Chi Kuo had said earlier in 2020 that Macs running Apple Silicon would be more expensive due to the costs of the chip transition itself and the burden of the supply chain. While the first batch of M1-based Macs stayed at the same price points as the Intel models they replaced, a price premium for the "24-inch iMac" would not be unheard of, especially for Apple. 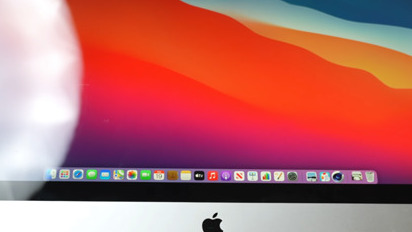 By disemboweling a M1 Mac mini and jamming everything inside an old iMac, a YouTube content creator cobbled together what he calls the world's first Apple Silicon iMac — with major caveats.
By Wesley Hilliard | 59 minutes ago
2 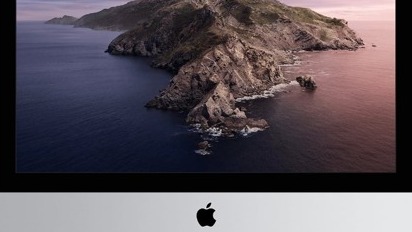 Apple has reportedly stopped production of the 512 gigabyte and 1 terabyte flash media configurations of the 21.5-inch iMac, which may signify an update is coming sooner rather than later.
By Mike Peterson | 19 hours ago
17 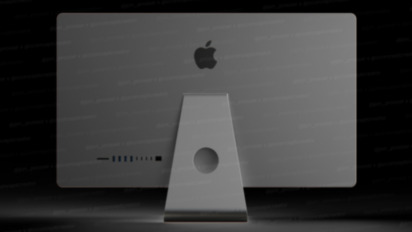 This week on the AppleInsider Podcast we discuss alleged renders of the 2021 iMac redesign and smaller Mac Pro, plus a supposed image of "AirPods 3," questions over the SSD longevity on M1 Macs, and more!
By Stephen Robles | 5 days ago
2 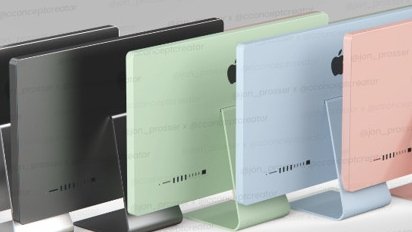 Apple is expected to release a smaller Mac Pro and a redesigned 24-inch iMac with Apple Silicon processors in 2021, and Jon Prosser has shared what they may look like.
By Wesley Hilliard | 1 week ago
103 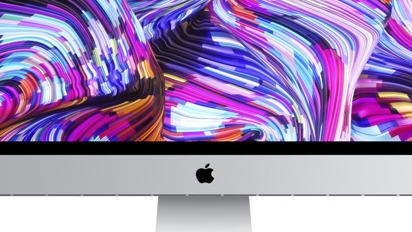 Reportedly, Apple's 2021 redesign for the iMac will not include Face ID as previously expected.
By William Gallagher | 1 month ago
24 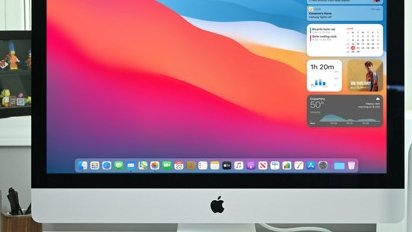 Apple is reportedly planning to release a redesigned iMac lineup with Apple Silicon chips, two new Mac Pro models, and a cheaper display in 2021.
By Mike Peterson | 1 month ago
70 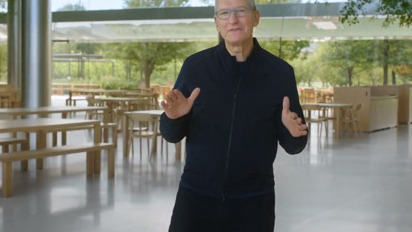 Following Apple's trilogy of special events, and the AirPods Max launch, Apple almost certainly finished with its hardware launches — but there's more coming. Here's what you could expect to see come out of Cupertino in early 2021.
By Malcolm Owen | 2 months ago
1 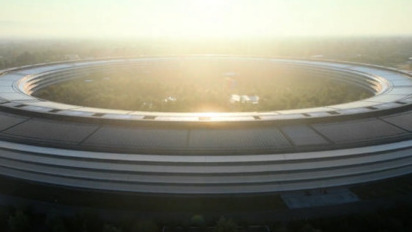 Special guest Jason Aten joins us for a year in review episode as we discuss everything Apple launched in 2020, our favorite hardware releases, software updates, and what we hope to see in 2021.
By Stephen Robles | 2 months ago
23

Apple would have liked you to associate August 2020 with it reaching $2 trillion in valuation, its new iMac launch, or with its Apple Music radio revamp. Unfortunately, it did also get into a little scrap with Epic Games which will take years to resolve in full.
By William Gallagher | 2 months ago
44 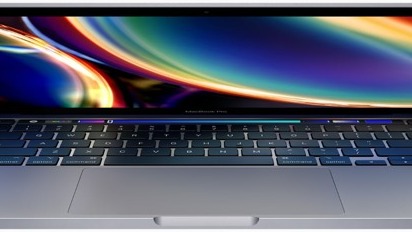 Component manufacturers claim Apple has an "aggressive" plan for production in 2021, with new Apple TV hardware expected plus a bevy of MacBook Pro models and a new iMac Pro predicted.
By William Gallagher | 2 months ago
15