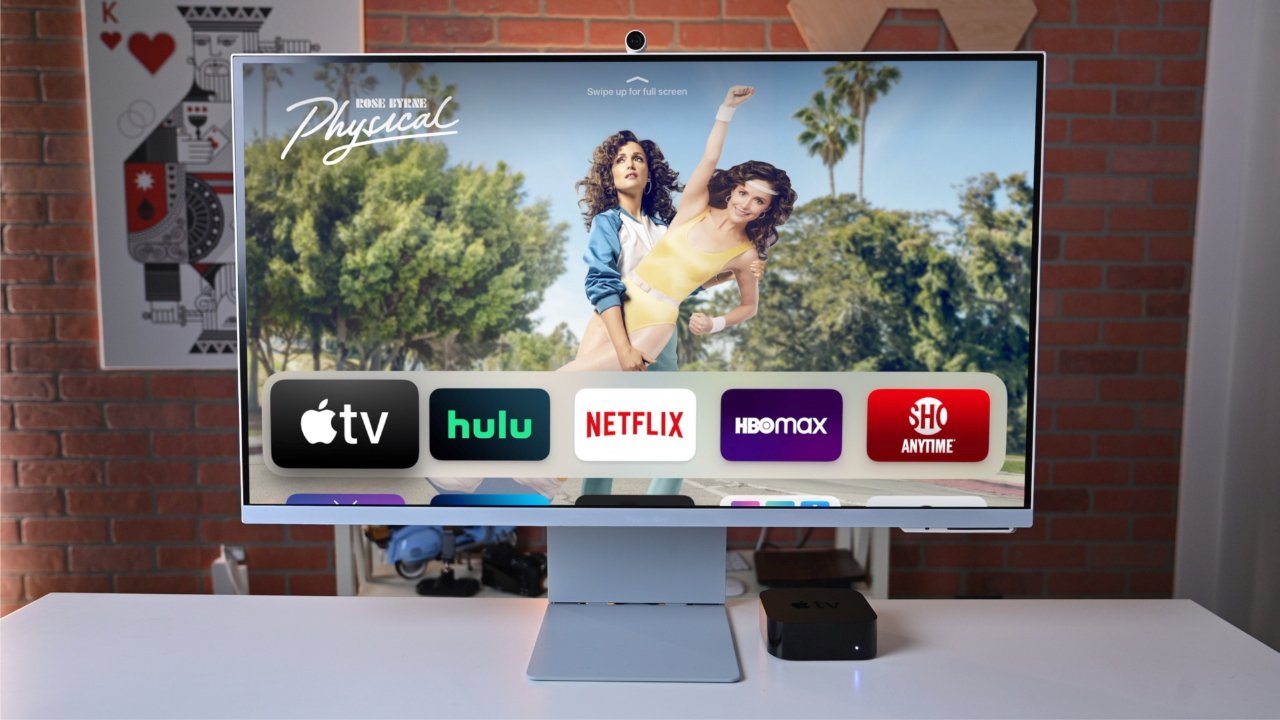 The Apple TV 4K is the fifth iteration of the set-top box. Featuring 4K resolution, High-Dynamic-Range, and Dolby Atmos sound this set top box aims to be the center of your living room. It acts as a hub for your family entertainment, HomeKit control, and Apple Services too, making it a great addition to your Apple ecosystem.

Introduced during Apple's September event, the Apple TV 4K is the fifth generation Apple TV, with the newest version of the set-top box primarily adding the ability to stream at the higher resolution, making it a useful purchase to owners of Ultra HD televisions. This model is the new premium at $199 pushing the fourth generation down to a single 32GB $149 model.

AppleInsider reviewed the Apple TV 4K, giving it a score of 4.5 out of a possible 5.

At face value, there is little to differentiate between the fourth-generation and fifth-generation models, with both having almost identical external appearances. The Apple TV 4K measures 3.9 inches square and 1.4 inches high, and weighs 15 ounces, all of which match the Apple TV HD's dimensions and weight.

To the front of the unit is an IR receiver, used to accept commands from the Siri Remote. Around the back and alongside the power supply connection, the 100Mbps Ethernet port has been switched out for Gigabit Ethernet, and the HDMI 1.4 port found on the Apple TV HD has been replaced by a HDMI 2.0a port. 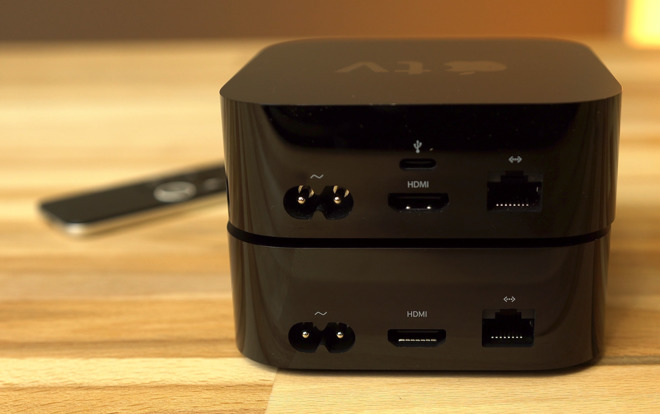 The only other externally visible change between the two generations is the seeming removal of the USB-C connection. This port was intended for servicing the device, and not for use by customers, so the removal from view is unlikely to be a major issue for users.

Internally, the A8 processor used for the Apple TV HD has been switched out for the 64-bit A10X Fusion Chip, giving the Apple TV 4K more performance when used for graphically intensive apps such as games, as well as making it easily capable of handling 4K video footage.

Internally, the Siri Remote includes an accelerometer and three-axis gyroscope, and Bluetooth 4.0 radios for communicating with the Apple TV. An IR transmitter for controlling volume and a Lightning connector for charging are also built into the handset.

The only change between the original Siri Remote and this version is the addition of a white circle around the Menu button. It is likely that this addition is intended to make orienting the remote the right way around easier in low light situations. 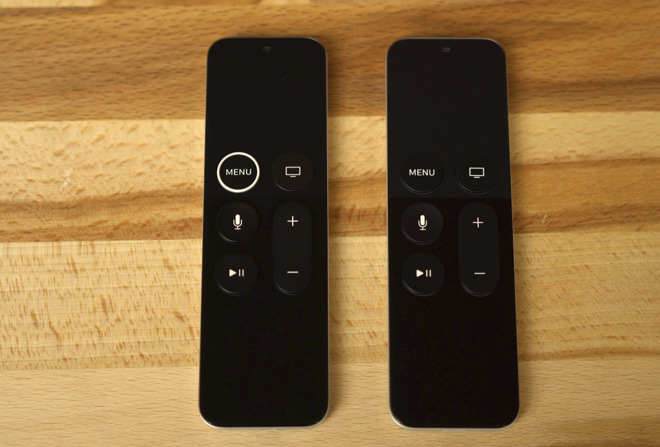 The Apple TV 4K supports output up to 4K 60fps and supports HEVC Dolby Vision and HDR10. Which means it can display high dynamic range content, allowing for more vibrant images when used with a compatible TV.

For audio, it includes support for HE-ACC(V1), AAC up to 320Kbps, protected AAC files from the iTunes Store, 320Kbps MP3s, MP3 VBR, Apple Lossless, FLAC, AIFF, and WAV. There is also support for Dolby Digital 5.1, and Dolby Digital Plus 7.1 surround sound.

The latest Apple TV's runs tvOS which is a variant of iOS made for the large displays and remote control. With its integrated App Store, users can download apps across hundreds of providers. Apple Arcade, Apple Music, and Apple TV all live here alongside your favorite entertainment apps.

Siri can be used to search for movies and TV shows, to control playback, and for typical non-video queries usually handled by Siri on iOS devices, such as weather reports and sports scores. With the inclusion of 4K content, it is also possible to use Siri to seek out high-resolution content across multiple apps at the same time, by asking “Show me movies in 4K.”

There is also support for AirPlay, a connectivity protocol introduced with the HomePod, which allows the Apple TV to control multiple AirPlay 2-compatible speakers, alongside any traditionally connected speakers as part of a home theater system, effectively making it possible for the audio from a TV show or movie to be heard throughout a household.

The Apple TV 4K can also be set up to match displayed contents original resolution and frame rate. Otherwise the Apple TV will attempt to apply HDR at 60fps to anything on screen, including the home menu. It is recommended that users set the default resolution to 4KSDR, then enable "match dynamic range" and "match frame rate" for best possible picture across all content. 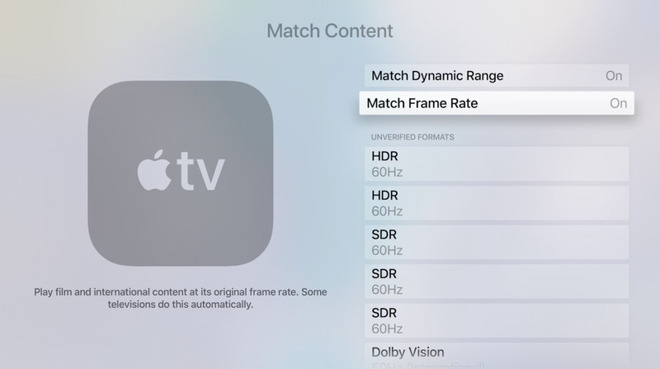 With the release of tvOS 12.3, Apple introduced a new Apple TV app experience across iOS devices and Apple TV, which fundamentally changed how users can sign up for streaming services. Under Apple TV Channels, users can subscribe to a selection of TV channels and offerings from streaming providers via the main Apple TV interface, all without requiring a download of a separate dedicated app, and allowing it all to be viewed within the same user interface. 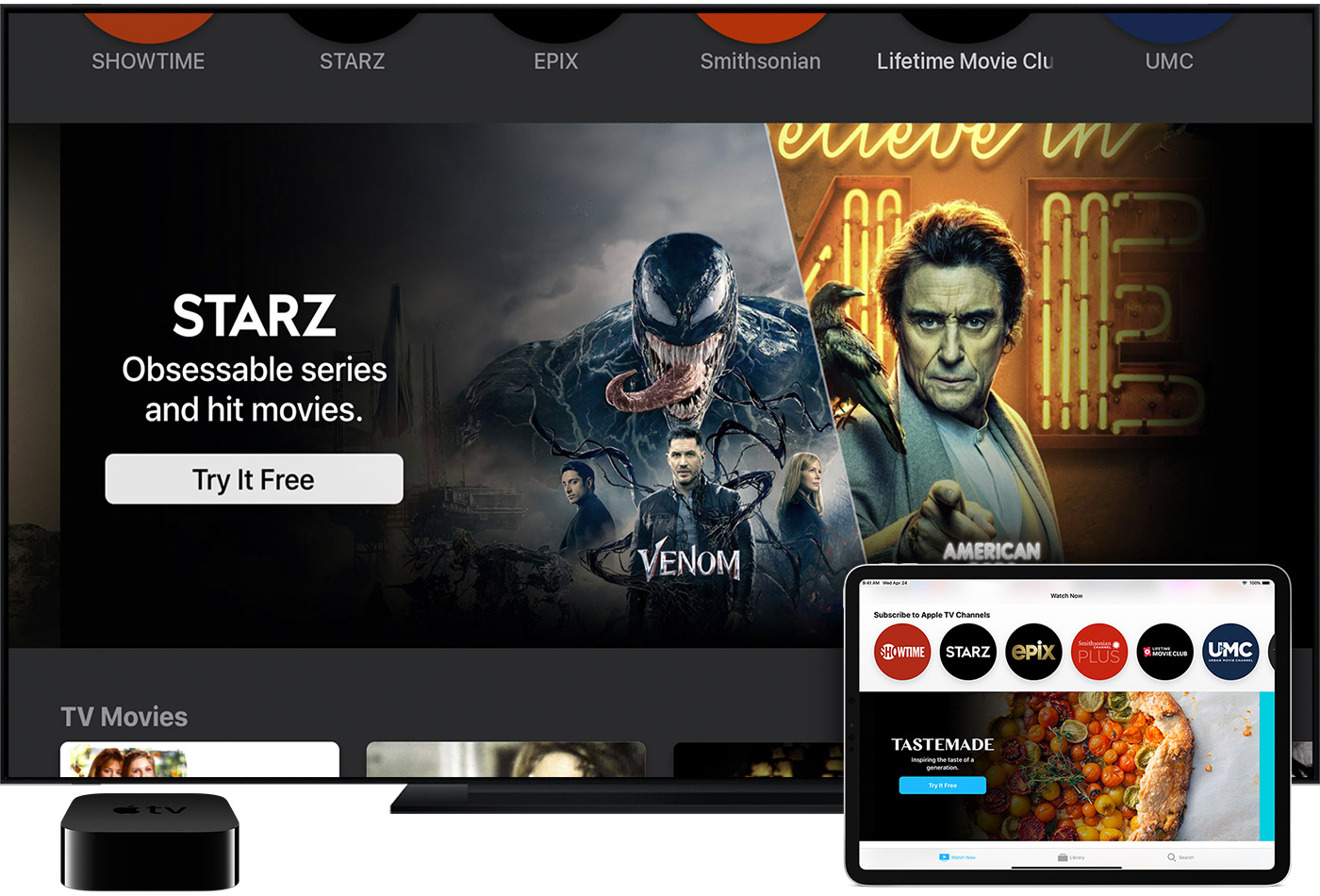 In effect, Apple TV Channels acts as an a-la-carte pay-TV subscription, with users being offered the opportunity to select and pay for just the channels they want to watch. Normal pay-TV services like cable and satellite typically require customers to buy large bundles, consisting of channels they want and others they have no interest in viewing, increasing the overall cost for consumers.

Channels subscribed to via the system can be viewed by others within a household via Family Sharing, in a similar way to other online Apple services, with up to six family members able to share their subscriptions using their Apple ID and password.

An update released in September 2019, Apple revised the interface in tvOS 13 to include a new Home screen that offered full-screen video previews of content.

Support for Apple Arcade was also added to tvOS, allowing users to play games from Apple's game subscription service. As part of the service, users could play a selection of games on their iPhone, iPad, iPod Touch, Mac, and Apple TV, without needing to worry about microtransactions or other payments, aside from a monthly fee.

To go along with the Apple Arcade support, the ability to connect the Xbox Wireless Controller with Bluetooth and the PlayStation DualShock 4 to the Apple TV was also included, giving users a more familiar game console controller to use with the service.

Watch: Everything you need to know about Apple TV 4K 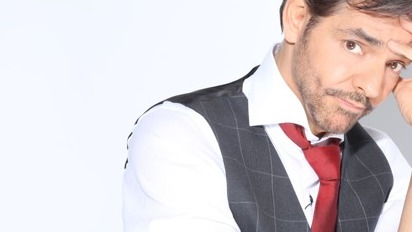 Apple has announced a new bilingual comedy series arriving on Apple TV+, with the Eugenio Derbez-fronted "Acapulco" telling the story of a man working at a resort in Mexico.
By Malcolm Owen | 22 hours ago
1 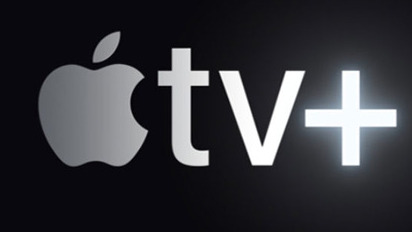 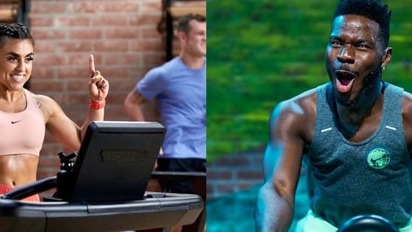 Instructors for Apple's soon-to-launch Fitness subscription have prompted the service on Instagram, with posts to their personal accounts showing what they will look like while recording workouts for subscribers.
By Malcolm Owen | 3 days ago
10 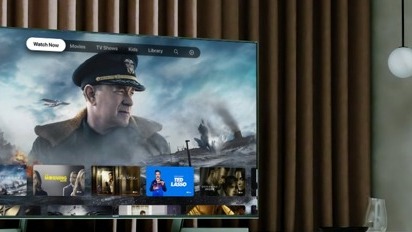 Sony is now rolling out the Apple TV app to its entire 2020 TV lineup, with the app also arriving on most of the 2019 lineup and select 2018 models.
By Mike Peterson | 5 days ago
7 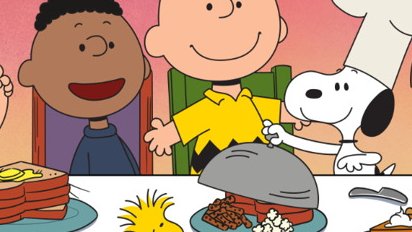 Although the famous Charlie Brown special will no longer air on ABC this Thanksgiving, it will be available on Apple TV+, and it's coming to PBS too.
By William Gallagher | 1 week ago 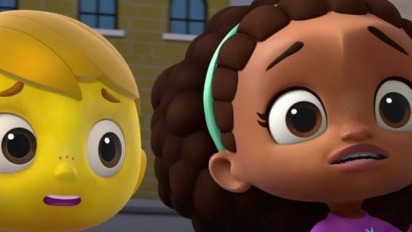 Apple has released seven trailers for "Doug Unplugs," with each showing the kind of learning experiences younger viewers can enjoy in the Apple TV+ animation.
By Malcolm Owen | 1 week ago
36 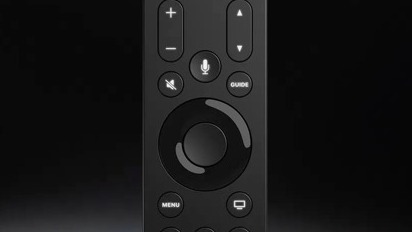 Universal Electronics is offering its own version of an easy-to-use "button-style" remote control for the Apple TV, one it hopes to sell to cable companies to be included as part of a streaming video package.
By Malcolm Owen | 1 week ago
0 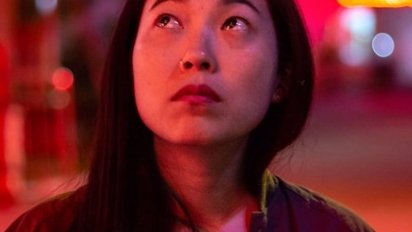 Awkwafina and Glenn Close are joining the production of the Apple TV film "Swan Song," a drama that already has Mahershala Ali and Naomie Harris onboard.
By Malcolm Owen | 1 week ago
9 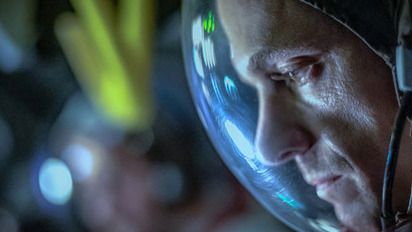 The second season of Apple TV+ hit "For All Mankind" will begin streaming on Feb. 19, 2021, the company announced on Thursday.
By AppleInsider Staff | 1 week ago
23 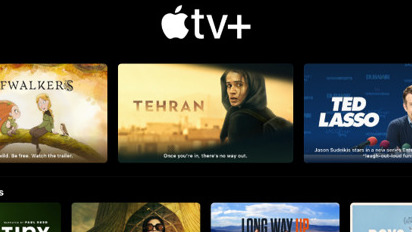 Apple is providing credits to customers who paid for access to Apple TV+, with paid subscribers set to receive $4.99 per month between November and January 2021.
By Malcolm Owen | 2 weeks ago
0