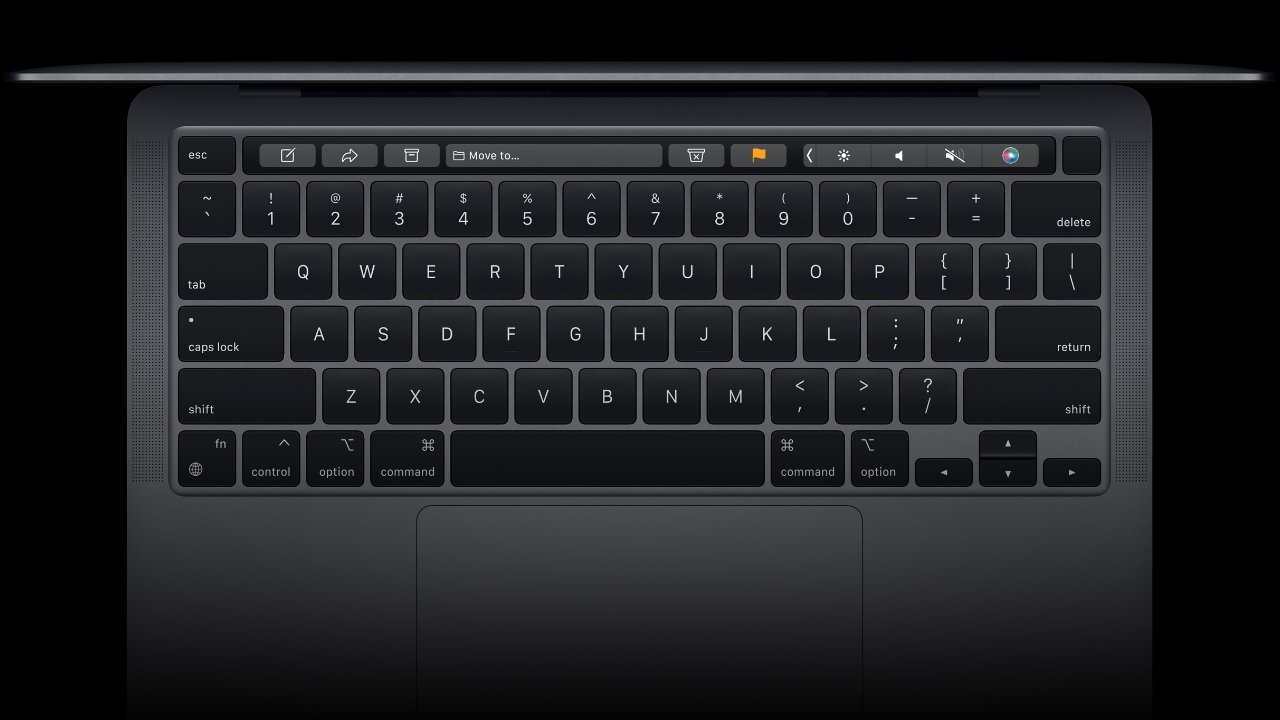 The 13-inch MacBook Pro with Magic Keyboard, updated 10th generation Intel processors, and doubled storage capacities, was announced on May 4, 2020. This was the final MacBook in need of the new keyboard and now Apple's entire laptop lineup no longer has the troublesome Butterfly Keyboard.

There are more expensive versions of this MacBook Pro which give yet better performance, more storage, and four Thunderbolt 3 (USB-C) ports instead of the two of the MacBook Air. The entry-level version of the MacBook Pro, with 256GB of storage and an 8th generation Intel i5 processor, makes a compelling step up from the MacBook Air.

Of course, if you want even better performance options, you'll likely be looking at the 16-inch MacBook Pro. 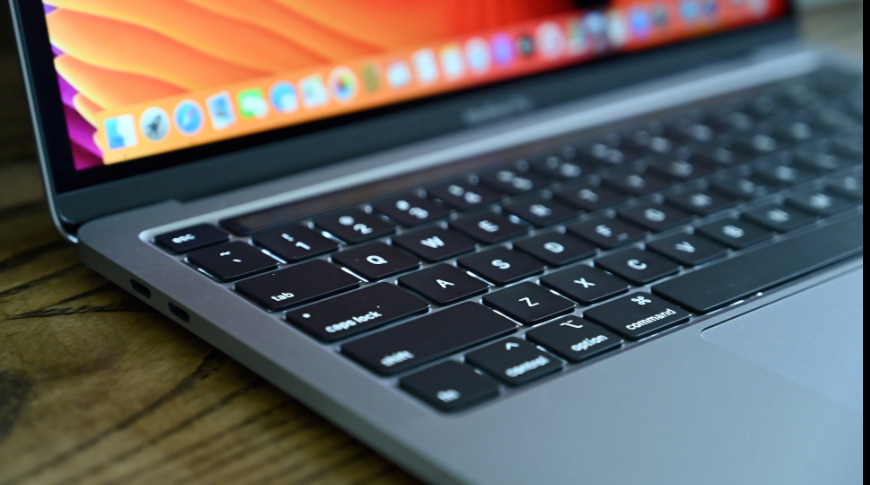 The 13-inch MacBook Pro has the latest Magic Keyboard

The new Magic Keyboard has finally propagated through Apple's entire product line, with the 13-inch MacBook Pro being the last to receive it. Even with multiple revisions, the Butterfly keyboard just couldn't shake its issues with sticky keys and slightly higher fail rates.

No reliability issues have come to light about the Magic Keyboard, however, and seems to be the perfect balance between travel and stability. Apple revealed its latest keyboard design with the release of the 16-inch MacBook Pro in fall 2019. From there they released the revised MacBook Air with the keyboard, and even the iPad Pro got an all-new keyboard case. The 13-inch update was a long time coming and is finally here with all the features you'd want from a modern Mac keyboard. 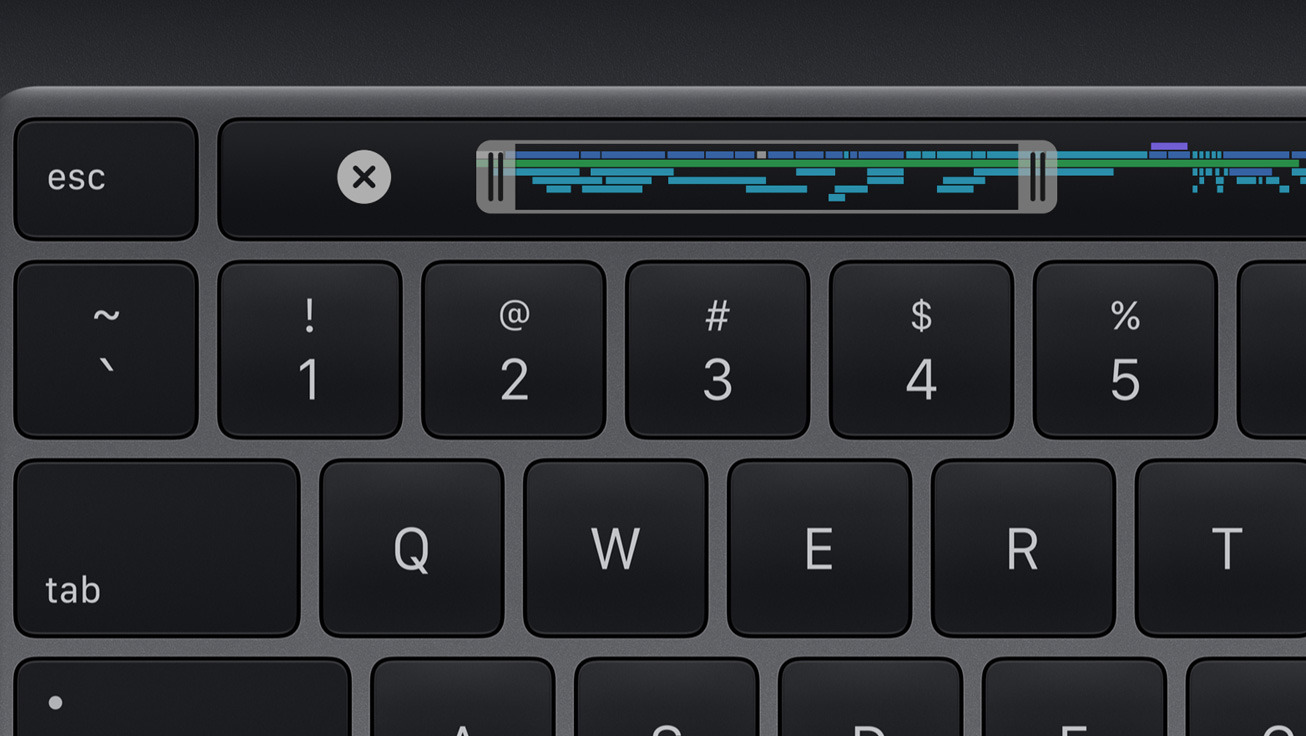 Keyboard on the 2020 13-inch MacBook Pro, including physical escape key

The return of the scissor-switch mechanism was accompanied by a few other welcome additions. The physical escape key is back, with the Touch ID button on the other side, sandwiching the Touch Bar in the middle. The new keyboard also features the inverted-T arrow keys.

The updated MacBook Pro did not change from the baseline processors used in the 2019 model but did include a new 10th-generation Intel processor for the most premium model. The MacBook Pro starts with a 1.4GHz quad-core 8th-generation Intel Core i5 processor, which can be turbo boost to 3.9GHz. This costs just $1,299 for the 256GB model.

For more performance, the base model of the MacBook Pro can also be configured with a 1.7GHz quad-core Intel Core i7 which can turbo boost to 4.5GHz. This is the new middle tier processor, having been pushed down from the top spot. This configuration with 256GB of storage is $1,599 but you may be better off getting the more expensive option. 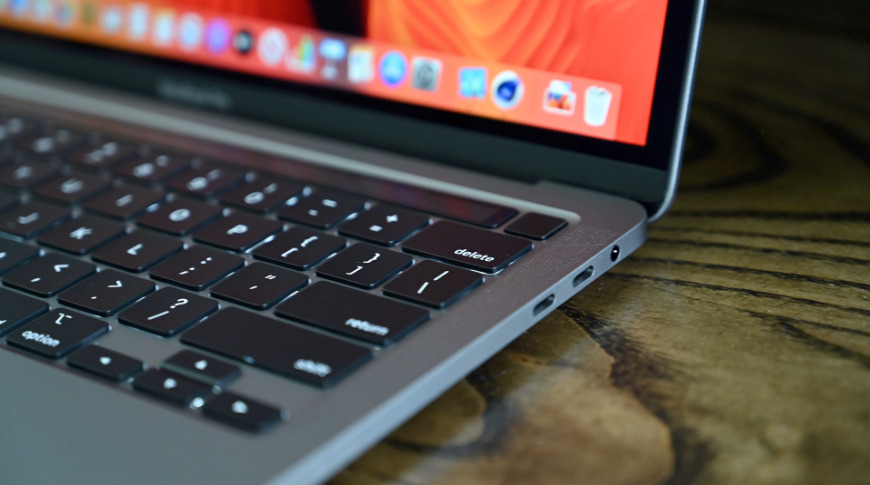 The model with four Thunderbolt 3 ports comes with 10th-generation Intel chipsets. The quad-core i5 clocks at 2.0GHz and boosts to 3.8GHz when needed. It's when you work on the machine for extended periods that you feel the difference in the processor and how that clock speed affects your work.

A maxed-out model with a 10th-generation Intel quad-core i7 2.3GHz processor, 32GB of RAM, and 4TB of storage will cost $3,599. While this is deep into 16-inch MacBook Pro pricing, or even a good iMac Pro price point, you can't beat the portability of this machine with that amount of power. 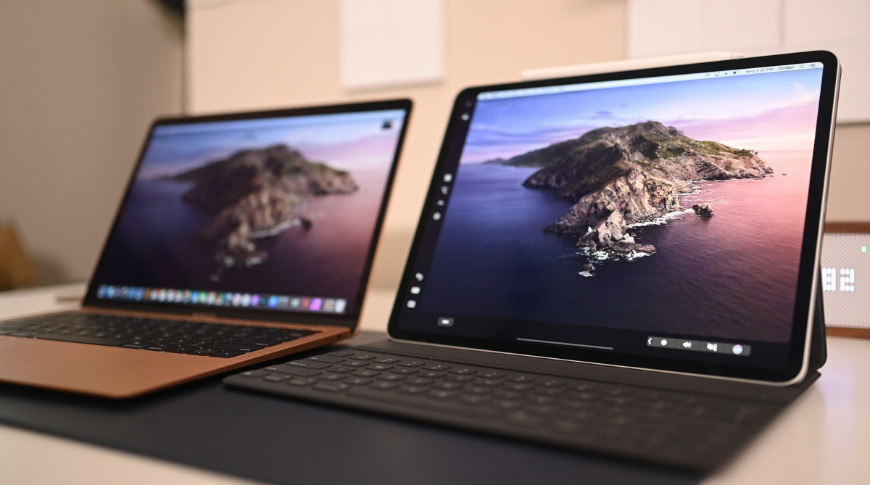 SideCar lets you extend or mirror your display to an iPad

The screen on the refreshed MacBook Pro has the same 13.3-inch LED-backlit screen with IPS and running at a maximum resolution of 2560x1600 pixels. The MacBook Pro features a Retina Display with True Tone and a P3 color gamut. If you've used a Retina device before, there will be no surprises here.

At a glance, you'll find differences between the two models immediately. The change from a Butterfly Keyboard to the Magic Keyboard is immediately apparent. The physical escape key and inverted arrow keys are most noticeable, the other differences will be found when you start typing. The butterfly mechanisms offer less travel and feel mushy vs the scissor-switch keys.

After the keyboard, the differences become harder to find. Apple didn't do a full processor revision but did update the top of the line with the latest 10th-generation chipsets. The 2020 model does have double the storage for the same price across the board, which means new customers are better off getting the newer model for memory alone.

Since these devices have the same keyboard and screen size, its best to look at design differences and processing power. The MacBook Air is meant to be the smallest and lightest MacBook for sale, which means some sacrifices had to be made for that thinness.

The baseline MacBook Air starts at $999 for the base model, which comes with a 10th-generation Intel i3 at 1.1GHz and 256GB of storage. Any upgrades to this model bring you right into MacBook Pro pricing, so the only advantage such a purchase would be is absolute thinness and portability.

The $999 price point is the killer feature of the MacBook Air, and the MacBook Pro just cannot compete with that. Those who need portability or budget above all else already know what they need.

Physical size would be the biggest difference here at first glance, but there are major tradeoffs between the two MacBook Pro models. The 16-inch MacBook Pro is the most powerful, portable Mac on the market and offers discrete GPU options and massive storage as well. You'll likely be in the market for this as a video professional or intensive app developer.

The 13-inch wins out when it comes to size and weight alone, giving users a powerful machine that can fit in most situations. The lack of a discrete GPU can be remedied with an external GPU however, due to the Thunderbolt 3 ports.

You'll be spending nearly double just to get in the door for the 16-inch model though, so likely users who need this device are already prepared to pay the price. It has not been updated in 2020, therefore it doesn't have the 10th-generation Intel processors. This hardly matters though as the base configuration comes with a 6-core Intel i7 processor at 2.6GHz, and a dedicated GPU.

When will Apple update the 13-inch MacBook Pro?

Apple updated the 13-inch MacBook Pro with the latest Intel processors in May 2020. Apple is expected to update its entire Mac lineup with Apple Silicon processors over the next two years, though it is not known when the MacBook Pro will receive the custom chipsets.

How many ports does a 13-inch MacBook Pro have?

How do you factory reset a 13-inch MacBook Pro?

If you want to set up your 13-inch MacBook Pro from factory defaults or sell it to someone, you’ll want to perform a factory reset.

How much does a 13-inch MacBook Pro cost? 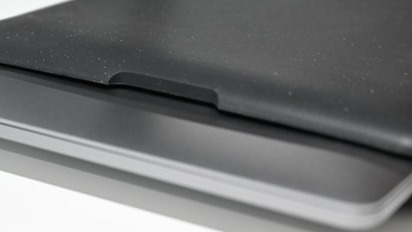 Lander's Argo protective shell is unlike many other MacBook cases in that it is designed for the road warrior. Not just stylish, but immensely protective, even keeping water at bay while you travel.
By Andrew O'Hara | 5 days ago
1 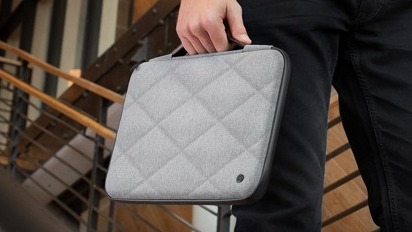 The TwelveSouth SuitCase is a twill-covered shell case for MacBook Air and MacBook Pro, and is designed as a do-it-all cover for your laptop.
By Andrew O'Hara | 2 weeks ago
0 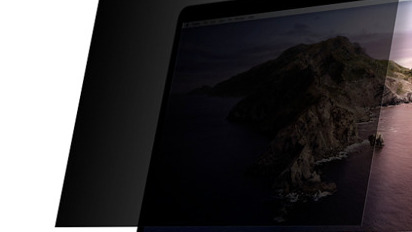 Prevent shoulder-surfers and "visual hackers" with the Apple Store-exclusive Kensington magnetic privacy screen for your MacBook Air or MacBook Pro.
By Amber Neely | 2 months ago
3 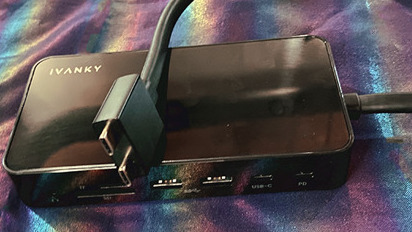 The iVanky 12-in-1 Docking Station is a plug-and-play dock that expands your MacBook Pro's ports without tying you down.
By Amber Neely | 3 months ago
8 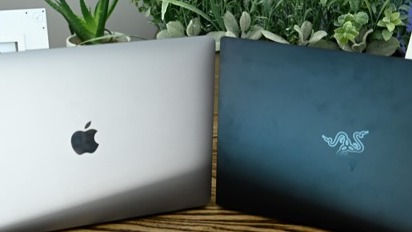 Razer is known for making premium notebooks intended for gaming on the move, but which can also be used as a creative workstation. We compare Razer's Blade Stealth 13 against Apple's 2020 13-inch MacBook Pro to determine which is the better compact powerhouse.
By Malcolm Owen | 3 months ago
39

We're used to being in lockdown now, and so is Apple. While still having no events, the company put out an extremely popular new 13-inch MacBook Pro, and did begin to reopen some of its stores.
By William Gallagher | 4 months ago
0 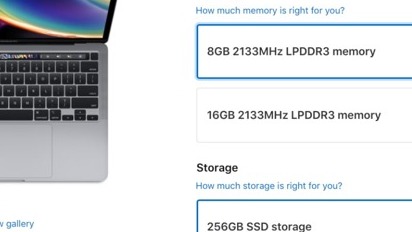 Apple has made it more expensive for customers to upgrade the memory on the 13-inch MacBook Pro, with the price of the option doubled on the entry-level model as part of a change quietly made on Saturday.
By Malcolm Owen | 4 months ago
16 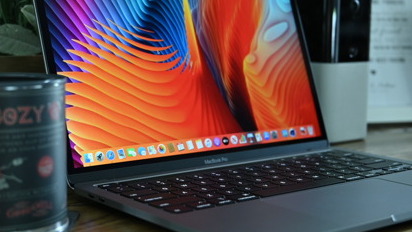 The 2020 13-inch MacBook Pro with new tenth-generation Intel processors is a powerful machine for the pro on the go, and is an ideal mix of power and portability.
By Andrew O'Hara | 5 months ago
41 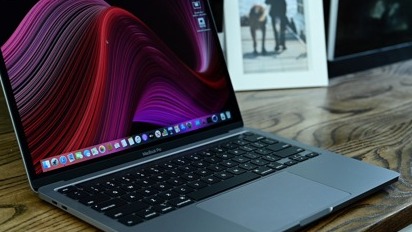 Since the 2017 revision, the 13-inch MacBook Pro line has been a tale of two computers, and the 2020 refresh is no exception. But, there are some interesting "updates" in the new model, that puzzle us, and make us wonder why they were made.
By Andrew O'Hara | 5 months ago
43 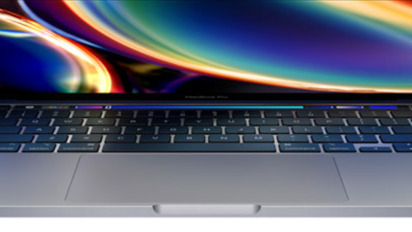 Don't pull the trigger on buying a fully-loaded 13-inch MacBook Pro just yet. At the higher end, there are cases where a 16-inch MacBook Pro will be a much better value.
By William Gallagher | 5 months ago
8